Aiming to fill the required supplementary budget, the government announced that it has created fiscal space against the Home Grown Economic Reform.
The government said that the tax and non tax collection in the coming months of the budget year will shrunk by 11 billion birr, while the indirect tax collection for March has dropped by close to 15 percent compared with the same period of last year.
Ahmed Shide, Minister of Finance, who appeared at the parliament to propose the second supplementary budget for ratification by House of Peoples’ Representatives, explained that the public revenue has been affected by the outbreak of Coronavirus.
He said that the slowdown of economic activity and export because of COVID 19 affected the government’s revenue that expected to amass in the budget year. 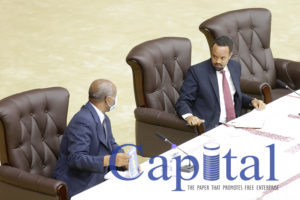 “For instance the indirect tax, which are mainly vat and excise in the Ethiopian context, collection for March has dropped by 14.8 percent compared with the same period of last budget year,” he said.
At the same time at the same month that the country disclosed the first COVID19 case in the country direct tax collection expansion is reduced compared with the previous months.
In March the direct tax collection growth rate was limited to 1.6 percent, while the average growth rate pre COVID 19 months was 22.8 percent, according to Ahmed.
Ahmed said that as per the forecast the effect of the virus will continue until the end of the budget year that will continue to affect the government’s revenue.
“In the coming period until the end of the budget year the government will lose 11 billion birr from tax and non tax revenue sources,” he added.
As per the estimation to prevent the virus and keep the public health, about 15 billion birr is required.
The government indicated that additional 15 million people, mostly in urban areas, will be included on the food safety net program besides the existing 15 million people, which means the people who are need of direct assistance will be doubled because of the virus.
To support the stated 15 million people the government needs to allocate 38 billion birr, according to Minister of Finance.
To cover the health and humanitarian support and to cover the government revenue gap, a total of 64 billion birr will be required based on the explanation documents tabled to the parliament.
So far some of the budgets allocated to some budgetary institutions at the beginning of the year have been transferred for the coming year and enable to secure 15 billion birr to battle the pandemic, according to the document. 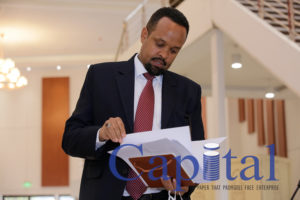 Besides from international partners, International Monetary Fund, the World Bank, and African Development Bank the government secured 28.6 billion birr as a grant and loan.
Ahmed said that to fill the budget gap and fill the supplementary budget the government has borrowed 20 billion birr from local sources, which is most probably from National Bank of Ethiopia (NBE). Borrowing from NBE means money printing, according to budget experts.
In the document tabled at the parliament Ministry of Finance explained that based on the required expense the finance mobilized from different sources is not enough. Due to that it is required to relax the supplementary budget approved for the implementation of Home Grown Economic Reform and creating fiscal space.
“It is a trend other countries followed to battle the pandemic and that is advisable for countries to follow under fiscal measures,” the document explained.
From the total 48 billion birr, including 20 billion birr of local borrowing, international partners have provided a 28.6 billion birr.
From the total amount secured from international partners almost eight billion birr is assistance and the balance is loan. The biggest assistance comes from the African Development Bank that is 5.4 billion birr and followed by the World Bank that provided 2.1 billion birr, and the government of France has provided 539 million birr as a loan.
The International Monetary Fund, who provided 13.8 billion birr budget support loan, is already channeled to the government coffer.
In April the parliament has approved 28 billion birr supplementary budget mainly to support the Home Grown Economic Reform agenda.
From the total of the first additional budget that was approved by Council of Ministers a total sum of 18 billion birr was for the implementation of homegrown economic reform agenda, two billion birr for safety net program, and 7.9 billion birr for national application of equal pay for equal work.