Executives of Federal offices will be accountable during their tenure at public offices after evaluation. Planning and Development Commission (PDC) launches Monitoring and Evaluation (M and E) System to centralize the evaluation and performance of federal offices.
Currently, officials and their staff or offices are responsible and accountable for malfunction occurred at public offices.
According to the new scheme the responsibility will also include poor performance.
At the launching ceremony followed by discussion, participants from different offices and professions raised the issue that the accountability should consider weak performances.
Meseret Damte, Deputy Auditor General of Office of Federal Auditor General, said that her office conducted performance audit for the readiness of PDC to attain the Sustainable 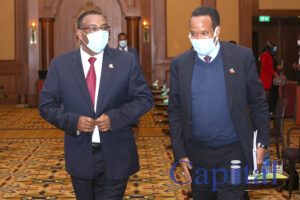 Development Goal (SDG) from 2015/16 to 2018/19 budget year. “We have seen some areas during the audits,” she said. “The gap of road map for SDG, the role of executors was not purely stated, and there is lack of information, administration and database, and we have also commented that public offices to participate the private sector and civic society in the preparation of programs, and to achieve the SDG’s we recommend PDC to conduct its strategy,” she explained.
Relevant and strong monitoring mechanism and coordination are also recommended for the achievement of the UN SDG goals that is expected to end by 2030, according to the Deputy Auditor General.
“We considered that PDC is using our recommendation to develop this software,” Meseret said.
She added that after developing this software and conduct M and E properly, “based on our experience and evaluation poor performance and lack of delivery was not considered as accountable due to that public property is wasted improperly,” she said.
Meseret strongly recommended that tough discipline should be considered and performance accountability will be applied.
Experts at the meeting said that performance responsibility has to be applied to qualify civil service operation.
Tsigereda Bekele, President of Ethiopian Evaluation Association (EEvA), and Getnet Alemu, Associate Professor at Addis Ababa University, have also recommended a performance audit as a crucial area to attain required performance and correct unnecessary losses.
Adanech Abebe, Attorney General, indicated that the political reform has considered the performance evaluation besides the usual controlling mechanisms.
“There is no culture in the country to become accountable for failure or under performance and that should be corrected,” she said.
“We are saying now that strong institutions should put to place performance evaluation and accountability that is considered under the reform,” the Attorney General added.
The trend of financing from foreign sources whether grant or loan has changed and focused on result oriented financing. Yasmin Wohabrebbi, State Minister for Economic Cooperation at Ministry of Finance said “due to that quality information produced under the new scheme will help us to go with the new nature of access to foreign financing.”
The scheme will contribute to accomplish projects as per the schedule besides running the debt settlement properly, according to Yasmin.
She underlined that discipline is a priority for the implementation of the system.
Fitsum Assefa, Commissioner of PDC said that the system will help conduct prudent study and draft policy development.

“In the past disintegrated reporting was conducted by government offices and up to six reports were developed,” she says adding “the new system will harmonize the reporting scheme.”
“M and E is equally relevant besides planning to apply strong controlling mechanism, which needs strong enforcement method by the government,” she added.
“Political commitment is crucial to make the system operational and achieve the development plan,” she said.
Success and result would be priority than focus on process, according to the Commissioner; the system would also contribute for data standardization besides strengthening controlling capacity.
Experts like Tsigereda and Getnet said that impact based evaluation should be implemented on the performance of project.
Getnet said that there were no consistent M and E in the past. He reminded that Ethiopia was a pioneer in introducing monitoring when the first five year development plan was applied in 1956, while evaluation was not considered a part. “Meanwhile we were pioneers even from Asian countries but the performance was poor,” he added.
The monitoring system during the Derg regime was relatively strong but that was eroded in the past three decades.
He criticized the politically motivated decisions that affect poor performance of M and E in the past decades. “It is difficult to give a decision on officials who are accused of ill operation because leaders will get political clearance,” he explained how the ruling party was involved. The Associate Professor recommended that the role of party and government should be disconnected to attain the targeted M and E.
“Lack of coordination, lack of understanding for evaluation and others are reasons for poor performance of monitoring and evaluation operation,” Getnet explained.
He said that public offices like the Prime Minister Office or PDC has a system but they are not integrated.

Tsigereda of EEvA said that M and E system is vital for better decision making since it indicates evidences and information about operations.
She recommended that besides political commitment taken recently national M and E plan is required for the ten year development plan.
“Since M and E by nature is resource intensive to do professional evaluation, we have to go on planned and selective manner for M and E implementation,” EEvA’s President said.
Tsigereda recommended the formation of strong and independent organs in public offices to conduct quality M and E.
The first comprehensive monitoring and evaluation directive was issued two years ago by the Council of Ministers.
“I frequently stated political commitment because it is crucial to attain the expected performance,” Fitsum said.
“We will apply the performance based accountability to measure the operation of leaders besides the usual legal accountability procedure,” she said.
“At the initial stage we give priority to support public offices to achieve their goals and narrow the weakest part,” she told Capital, adding “offices may get three half years based on the evaluation to correct the weak performance but after that based on the direction stated on the directive measures will be taken if the failure is not corrected.”
Zerihun Kebede, a software developer at a Technology Institute, said that that the new scheme will help international organizations to get proper information.
The system has interface with the Office of the Prime Minister to look the performance of public offices.
The M and E System will be implemented as soon as possible during the ten year development plan, the Commissioner told Capital.
The system has interface that is accessed by ministers and they are responsible to report their performance via the platform.
The software is developed locally as per the deal with Ministry of Technology and Innovation.
Abraham Belay, Minister of Technology and Innovation, said that the ministry will continue to provide similar support without charge for public offices and will continue to work to improve the master reporting system.
Fitsum said that the next step will be developing the capacity of public office to be familiar with the M and E System.
Inspection works and evaluative research would be conducted based on the platform.