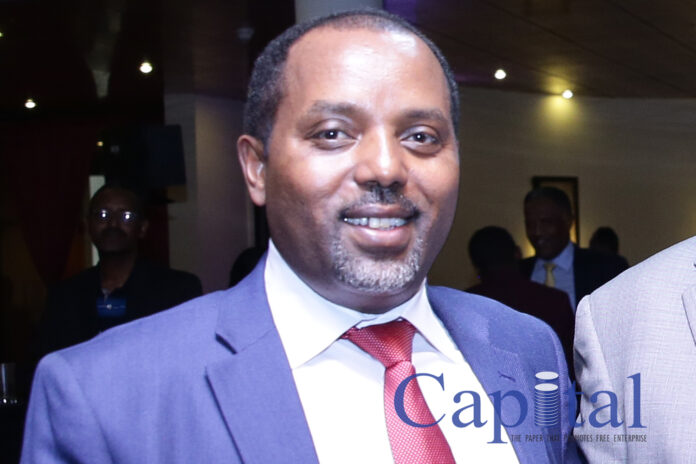 Massive senior management reshuffle and structural change has been done at the financial giant Commercial Bank of Ethiopia (CBE) following its poor performance in the last financial year.
Under the new structural change that happened this week the stated owned financial institution in the country folds chief officer positions. According to sources, the bank was extremely horizontally flattened that have nine chief officers and under them 24 vice presidents.
According to sources, based on the new reshuffle the chief officer position is fully suspended and the number of vice presidents is reduced to 18 from the previous 24.
Risk, human resource, finance, business development, business operation, and information system are some of the chief officer positions that were extended during the former president Bacha Gina era, who was replaced by Abie Sano in March this year. Bacha Gina served the bank for about one and half year.
Sources said that besides position reforms some of the former top managements were replaced by others. “Those who maintain their senior position are very few,” sources said.
Besides the changes at the head office, the bank has also made some structural changes at district and regional branch structures.
Based on the new structure a district included in a region will manage 50 branches.
“The new change at the top management structure would be good to manage the bank than previous trends,” a source who criticized the past experience told Capital.
In his recent internal memo Abie, who is being lauded as responsible for the success of the bank’s transformation about a decade ago before he went to Oromia International Bank (OIB), expressed his frustration about the performance of the bank in the 2019/20 finance year that ended on June 30.
In his memo issued on Tuesday August 4, he hinted that changes would be taking place at the bank. “Those who are accountable for this disgraceful performance will be held responsible, while we have to work hard to return the bank to its successful track,” Abie said to the staff of CBE.
He said that meanwhile the revenue of the bank for the year has shown a minor increment the administration expense consumed all its profit. “Even though the bank’s revenue expanded by 4.4 billion birr, expenses consumed it by three fold,” he wrote in his memo.
In the year the bank performance has dropped by over 10.3 percent compared with the preceding year performance. In the 2018/19 financial year the bank secured more than 15.6 billion birr profit with 90 percent achievement compared with the target. However in the 2019/20 financial year the bank’s profit has contracted to 14 billion birr that has over 10 percent reduction compared with the preceding year and 36 percent lower than the targeted performance in the year. In the 2019/20 financial year CBE targeted to secure close to 21.8 billion birr.
In the year CBE also targeted to amass 100 billion birr from fresh deposit, while the achievement is 54 percent. A year ago the bank mobilized 89 billion birr that has a 35 billion birr difference from its latest performance.
Regarding revenue for the year the bank achieved 107 percent of the target and collected close to 68.8 billion birr, while the expense that significantly hiked from the target has consumed most of the revenue.
For the year the state giant expected to expend 42.5 billion birr, while the actual expenditure stood at 54.8 billion birr with additional 29 percent hike.
Sources at the bank said that the major reason for expansionary expense is the salary increment that was done in the year. The bank has increased staff salary almost by double, which surpassed the bank’s expense. “Besides salary expense inflationary situation at operations like building rent has some contribution,” a source said.