Public Procurement and Property Disposal Service (PPPDS) introduced two envelops bidding process for the procurement of wheat that is highly appreciated by actors.
The Service that opened a financial bid document for 600,000 metric tons of wheat on Wednesday May 13, stated that based on the lessons learnt in previous bidding process it introduced new bidding process.
Tsewaye Muluneh, Director General of PPPDS said that the new scheme will accelerate the procurement process.
According to the new scheme PPPDS has opened the technical document few days before it opened the financial offer.
Based on the new scheme companies, who passed the technical evaluation, will participate in the financial process.
In the past both technical and financial documents will be opened at the same time, which was a challenge to conclude procurements on time.
A company representative that participated in several public procurements for several years highly appreciated the new approach introduced by PPPDS.
“This is very clean and transparent and the country is supposed to follow similar procurement process in the future,” he said.
He added that the scheme will clear corruption suspicions and is a perfect approach.
“Even the shipment approach is very clear that Ethiopian Shipping Logistics Services Enterprise (ESLSE) presented the port of loading price that will determine the winner of the bid,” he said.
The bid is undertaken under free on board (FOB) and the winner will be determined by the FOB price that ESLSE, the state owned shopping monopoly, offered.
The PPPDS bid document stated that the buyer (PPPDS) will ask the freight cost from each bidder’s loading port up to Djibouti from ESLSE and evaluate the price on C and F and award the least bid price. “However the contract shall be signed on FOB bases,” the document added.
The bid document for the procurement of 200,000 metric tons of milling wheat for instance indicated that bidders shall provide only one loading port for one lot and can provide only two different ports for the two lots on technical and financial documents.
Tsewaye said that this will make the state owned enterprise beneficiary.
Abeba Alemayehu, Procurement and Contract Administration Sector Deputy Director at PPPDS, told Capital that the previous one envelop system was not benefiting the government. For instance the price of wheat shall be low but the transport cost will be very high, which makes the total final price very escalated.
“The supplier offers FOB price and the government cover the transport cost but based on our study it costs the government; for instance the carriage cost for the wheat that comes from Black Sea and Argentina port does not have similar rates,” Abeba said.
She said that the new system will benefit the country.
On Wednesday the financial document was opened for two separate bids that resided for 200,000 metric tons and 400,000 metric tons of wheat.
On the first bidding process for the procurement of 200,000 metric tons on two lots seven companies; Ameropa AG, A Plus Importer, Besc Ltd, Okapi, Gemcorp Commodities Trading, Hakan Agro DMCC, and Hayton Inc have offered their financial proposal.
Gemcorp gives USD 204.97 per ton for the first lot that has 100,000 metric tons and USD 202.33 for second lot that has the balance the total 200,000 metric tons. Gemcorp’s offer for both lots is the least amount.
Other least prices for the first lot is USD 212.75 per ton Ameropa, USD 217 of Besc, USD 219 of A Plus, , and Okapi’s USD 219.97.
For the second lot Ameropa offered USD 209.75 a better price after Gemcorp.
For the bid to procure 400,000 metric tons of wheat five companies financial offer was opened at the hall of Ministry of Finance.
Hakan Agro DMCC, Agrocorp, A Plus Importer, Marthina Mertens Sampl and Olam International are the companies that participated in the financial offer.
Agrocorp, A Plus Importer and Marthina Mertens offered for all lots that have four with 100,000 metric tons each. 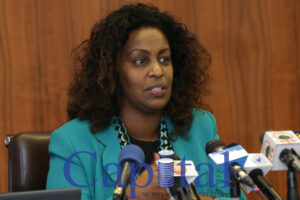 Marthina has offered USD 219.15, USD 219.35, USD 219.49 and USD 219.99 per ton from lot one to four respectively. From one to four lots Agrocorp offer has also offered USD 227.5, USD 229, USD 230.5, and USD 232, while A Plus offered USD 219, USD 221, USD 223, and USD 225 per ton respectively.
Olam International offered USD 212.7 for first lot and Hakan that participated on third lot has offered USD 229.17.
The Singapore based company Olam International’s offer is very low meanwhile it offered for a single lot (lot 1).
The German company, Marthina Mertens offer for all lots, has offered better price except first lot while the company is not known on such business not only for Ethiopia but in the world, according to experts.
The procurement for 400,000 metric tons of milling wheat has been undertaken in the past but due to claims from bidders it has been taken several periods to close the case. Following the board, who looks the claims, annulled the bid the Service has been refloated the bid late February.
Tsewaye said that the final result will be disclosed by next week.
The milling wheat is procured for Ethiopian Trading Businesses Corporation and Ethiopia National Disaster Risk Management Commission that will secure 200,000 and 400,000 metric tons respectively.
In the budget year PPPDS targeted to buy 800,000 metric tons of milling wheat and 200,000 MT has already been awarded to A Plus.