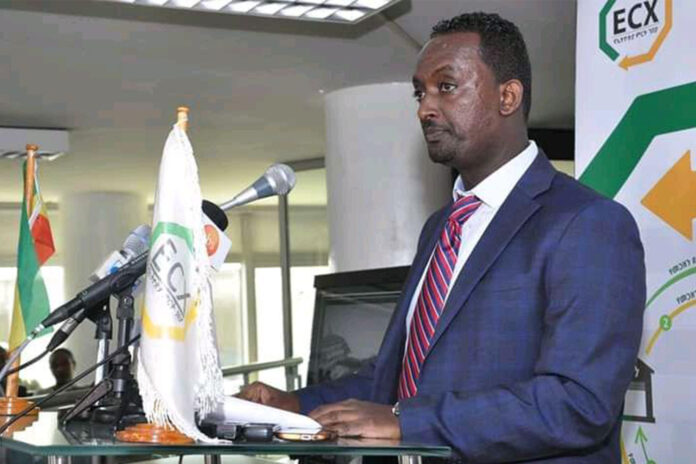 The products entering the warehouses of the modern trading platform Ethiopian Commodity Exchange (ECX) has increased in the last couple of weeks, Capital learned.
Experts who observed the trading activity at ECX told Capital that the product that ECX is trading has shown increment in the past few weeks.
Wondimagegnehu Negera, CEO of ECX, confirmed that the arrival commodities at ECX warehouses increased. But he said that it is not that much exaggerated meanwhile the production arrival at the warehouse increased.
Experts said that tight control on contraband and the recent implementation of strict border control and closure to control the COVID 19 outbreak might have effect to increase the arrival of the product to the legal market.
Three weeks ago Prime Minister Abiy Ahmed announced the closure of all border outlets except for logistics to control the global pandemic.
Wondimagegnehu more or less accepted the speculation that the border closure might help increase product arrival at the warehouse. “Tight control and the recent decision might have the effect on the increment of the product to the legal trading floor,” he said.
He also estimated that speculations might have effect on the increment of the product for the trading centre. a
“At the beginning of the outbreak in China the demand for commodities declined and due to that some of the speculation mismatch with the situation that might be the reason for the increase of the arrival of commodities at the trading warehouse,” the CEO said.
One of the exporters of sesame seeds and pulses told Capital that the market has been affected in the past few months on two products particularly in relation with the closure of China due to the pandemic.
“Now things are improving in the Far East country,” a representative at one of the exporting company, who asked for anonymity, told Capital.
He said that there was shortage on some of the products at the trading floor that it hopes things might be improved in the coming days.
In related development, the exchange has announced that it has taken firm measures to downsize the number of traders at the trading centers.
Netsanet Tesfaye, Public Relation Head at ECX, told Capital that since the outbreak was confirmed in the country the trading floor has applied several changes on the electronic trade.
He said that a representative of the companies that attend the trading has dropped to one for one company; in the past more than one representative shall attend the daily trade.
“For trading of pulses and oilseeds which is usually held every morning, the number of attendants from both sellers and buyers is reduced by half and the balance number will attend the other day trade,” Netsanet says “we make it the trading of one company in every other day classifying them on alphabetical order.”
According to the Public Relations Head, the coffee trading, which is usually held every afternoon to fit with the trading time of New York, attendants have also classified in to two and traders will attend the trading every other day besides reducing the number of representative of companies to one.
He said currently the flow of product to ECX warehouse is being undertaken as usual. “Even some of the products has shown increment meanwhile it is difficult to understand the reason,” he added.
The trading floor has also divided its staffs into two and every other week one of the two staff of group leave the office.
“We will continue our trading since it is the motor of the country’s economy and the hard currency source,” “I assure you we will be the last if the government ordered forced total locked down in the country,” he confidently disclosed that the trading floor will not suspend its operation until the last minute.
Currently ECX has two actual electronic trading platforms in Hawassa and Hummera besides the centre at its head quarter in Addis Ababa.
Netsanet disclosed that the Nekempt trading floor will commence operation when the situation around there is solved.
He added that stiff safety measures are also been taken at the ECX branches to keep the safety of daily laborers and others coming to the branches.
Currently ECX is exclusively trading coffee, sesame, red kidney bean, white pea bean, mung bean and soybean.
In the 21 trading days of March, ECX has facilitated the trading of 3.84 billion birr worth of 75,000 tons of commodities.
From the stated value and volume, the coffee trading has taken 63 percent and 40 percent respectively. Compared with the same period of last year the value has climbed by 24 percent, even though the value shows a two percent drop.
Different global market figures indicated that the price of coffee has shown increment at the same time the demand surged.