A regulation to open up the multimodal sector for private actors has been tabled to the Council of Ministers.
Ethiopia in 2011 had introduced the multimodal scheme which in logical sense unveiled a monopolistic approach in the logistics business. This was a result of the amalgamation of the Public Logistics Enterprises; that is, Ethiopian Shipping Lines, Dry Port Service Enterprise, Comet Transport and Ethiopian Maritime Transit Service to form the Ethiopian Shipping and Logistics Services Enterprise (ESLSE).
Since then the private logistics actors have expressed their concern stating that the decision made would totally alienate them from the sector. On the other hand Government has argued that it would open the sector to the private actors without specifying the timeframe of when it will do so. 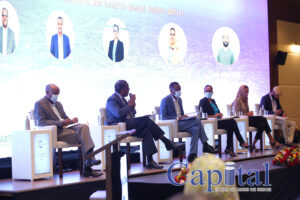 According to the information that Capital obtained from the sector actors concerning any improvements on the sector, they affirmed that, the National Logistics Transformation Council has approved the draft regulation that is supposed to be ratified by the Council of Ministers. The draft regulation seeks to have a more open multimodal scheme, which offers the transportation of goods through different means of shipping including rail and road under a single contract.
Mekonnen Abera, Director General of Ethiopian Maritime Affairs Authority (EMAA), told Capital that the regulation has already been sent to the Council of Ministers for approval.
“The sector has received attention from the government,” he said.
He expressed that there are about 100 intervention areas awaiting response in the logistic sector, of which the multimodal reform is a major part. “One of the top areas that the logistics council which is comprised of relevant government bodies and private sector is keenly focused towards is the multimodal scheme,” he added.
In addition, he stated that the sector will be open to limited and capable developers. Furthermore, Ethiopian Logistics companies may come together in a joint venture to form strong entities so as to be part of the business.
Currently, the major share of import commodities is managed under the multimodal scheme. Private freight forwarders and shipping agents have however claimed that it is affecting their business.
On an aim to relax the sector and in response to the private actors’ claims, the government had proposed a directive that allows private logistic actors to operate under ESLSE in a subcontract level. This however has proved to be non-effective in calming the situation.
Under the directive issued a couple of years back, a private sector was allowed operation under ESLSE if they met the requirements such as; 5,000 square meters of transit plot and a capital of 10 million birr. 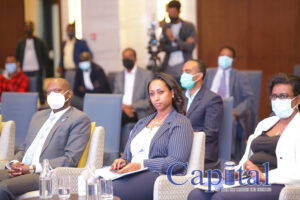 When the multimodal law was originally issued about a decade ago under the Ministry of Transport it indicated that any company that demanded direct involvement (Not under sub-contract) should have a capital of 100 million birr amongst other criteria. When Mekonnen was asked to disclose whether this was amended in the draft that was tabled to the Council of Ministers, he was reluctant to disclose further information on the matter.
The logistics sector is one of the areas that the government targets to open for local and foreign investors and to that effect it has disclosed that in its reform plan it plans to open some of the monopoly businesses to the private sector and foreign investors
As per the government’s decision, the involvement of foreign investors on the logistics sector is limited to up to 49 percent.
So far, CMA CGM and Bolloré Africa Logistics, both French companies, have agreed to get the maximum share on two local logistics companies.
The logistics sector of Ethiopia is one of the bottlenecks for its economic growth. The government has been trying its best to modernize the sector but the change is not as required.
On Thursday 1st of October, the first transport policy and logistics policy have been discussed with stakeholders.
Mekonnen says that these policies are crucial when it comes to a better strategy solution both in improving the logistics sector and in the creation of a conducive business environment, with business attractions and rich investment flows which the government needs.
Apart from the multimodal scheme, the dry port investment is another area the government wants to open for local investors.
According to sources, the new regulation is expected to be approved by the Council of Ministers in the coming few weeks. 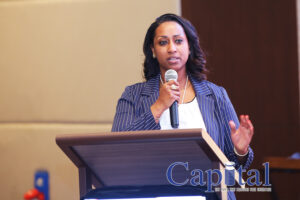 The National logistics sector policy mentioned the private sector to be competitive. “A number of private investors have showed interest to involve in the logistics service sector; however, it has not been possible to entertain their interest because of structural and legal framework limitations. The involvement of the private sector will make the logistics sector competitive, effective, profitable and thus, contribute to the growth of the economic sector,” the policy added.
The National Logistics Sector policy, mentions that private actors introduce good competition. It states, “A number of private sectors have shown interest in the involvement of the logistics service. However, it was not possible to entertain their interest because of the structural and legal framework limitation. The involvement of the private sector will however make the logistics sector competitive, effective, more -profitable thus contributing to the growth of the economic sector.” It adds that in the basis of policy formation, the involvement of private actors was accounted for.
The transport policy has also considered the integration of different modes of transport, expansion of infrastructure, making the sector competitive, encouraging the private sector actors, mobilizing required funds and integration on the best use of land for the transport sector.
One of the biggest private logistics players, which demanded anonymity, told Capital that for the country with more than 110 million people and huge economic potential requires at least four multimodal operators, because it is crucial to support the total population in different arena.
The logistics player informed us that the government is working to open the sector in the coming few months which will have a good effect to the logistics sector economically.
“Liberalization is a crucial factor for importers, exporters, manufacturers and input importers. This is because under the uni-modal scheme documentation work is done separately which causes cargo to be stalled in the Djibouti port regardless of the shipments arriving early from Dubai or Saudi,” he said.
“We are in foreign currency scarcity and cargos increasing in demurrage at ports continually affects us but if we properly approach the multimodal scheme cargos shall be immediately be transported to their respective countries as paper work is finalized here,” the logistics operator said.
“When transportation takes few days it results to better pricing of goods and efficient use of the railway system which benefits the general public. Furthermore, it reduces cost of logistics thus improving the enterprises activity,” he added.