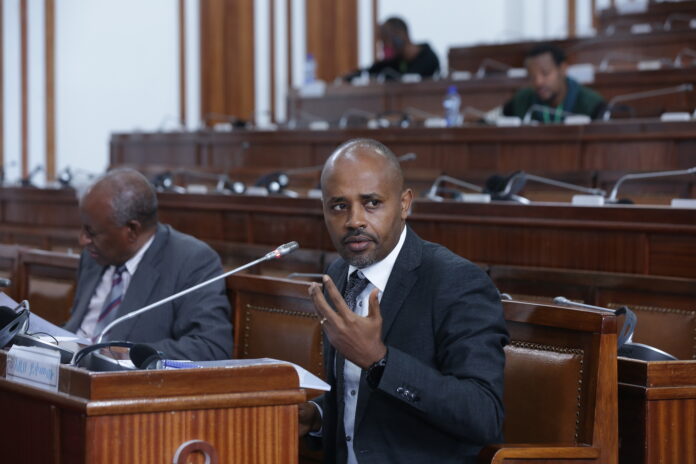 For the coming budget year the government targets to fill the major share of the budget deficit from Treasury bill (T bill) against direct borrowing. The tax collection from indirect taxes is also set as a major source for the period.
It has been recalled that Minister of Finance (MoF), Ahmed Shide, delivered his budget speech for the 2020/21 for parliament few weeks ago. For the budget year that will commence on July 8, 476 billion birr was tabled for ratification that has an increment of 7 percent from last year’s budget that includes the supplementary budget.
From the total budget tabled for the year the deficit is 126 billion birr, which is less than three percent of the gross domestic product (GDP) and of this 48 billion birr will be covered from external borrowing, while 78 billion birr will be filled from domestic borrowing.
During the hearing at the Revenue, Budget and Finance Standing Committee held on Wednesday June 25 Eyob Tekalign, State Minister of MoF, explained that the major share from domestic borrowing will be taken from T bill that the country reintroduced this budget year with attractive interest rate.
He said that the direct borrowing from the National Bank of Ethiopia (NBE) will not exceed 30 billion birr. International financial institutions advice that the budget deficit should not exceed from three percent of the country’s GDP and mostly the deficit for Ethiopia does not reach the percentage stated above.
At the same time filling the budget gap from direct borrowing from NBE is one of the instrument that hike the inflation since it is direct finance pump or money print.
This time around he said that the government is mainly using the finance sucked from the market than direct borrowing from NBE. He argued that for the budget year that is ending the central bank has traded 20 billion birr at the T bill auction, which is way much higher than the target. The target was to collect about 6 billion birr from T bill auction.
“It shows how the government will cover the major share of the budget deficit from T bill than money print,” he explained.
The NBE T bill that commenced in December last year with features and market base interest rates attracts private actors like financial institutions besides the traditional pension funds.
Eyob told Capital that in the 2020/21 budget year the government is expected to get up to 45 billion birr from T bill market. “It will make the direct borrowing to reduce from 25 billion to 30 billion birr,” the State Minister added.
“We reformed the T bill to collect liquidity from the market and our target was to amass 6 billion birr until the end of the budget year that will be closed on July 7 but the actual result is close to 20 billion birr until now,” he elaborated.
The T bill auction is held every two weeks under NBE. The domestic loan that is in total of 78 billion birr is 1.8 percent of the GDP.
On the session the standing committee members raised that the current COVID 19 effect would reduce the tax collection for the year of the coming budget year, while the budget proposal stated that the tax collection will cover 271.7 billion birr that has an increment of 11 percent compared with the projection for the current budget year.
“The current condition affects the economy and how could you collect the stated amount of tax for the year,” the standing committee members asked.
Eyob, who agreed with the concern, said that the government will focus on indirect tax than corporate tax. “You are right the corporate tax (income tax) will be reduced in the coming year due to the effect of the virus but the tax collection from indirect sources will fill the expected tax collection targets,” he explained.
In his speech presented on June 11, Ahmed said that the value added tax reform will be applied besides improving the tax administration. “Tightening the tax incentive management will also improve the government revenue collection for the year,” he added.
“The tax projection is of course ambitious but realistic,” Eyob said this week. In the year the government has also targeted to introduce property tax.
The tax GDP ratio will be at 6.6 percent at real market value, according to Ahmed. It indicates that the country tax collection growth rate compared with the GDP is not going proportionately and even it is reducing year to year.
The country tax to GDP ratio is very low compared with peers in the region. The government is interested to boost the ratio as high as 17 percent, while in actual terms the performance is reducing from time to time.
In the budget, as usual the Ethiopian Roads Authority (ERA) secured the biggest budget allocation with 50 billion birr from public coffer and 9.6 billion birr from international loan and donation.
“Our proposed budget for the year in total is 59.6 billion birr that has a 29 percent increment compared with the 2019/20 budget year,” Samson Wondimu, Public Relation Head at ERA, told Capital.
According to the State Minister of MoF, the budget allocated for debt settlement is 37 billion birr that has an increment of 12 billion birr from the current budget year.