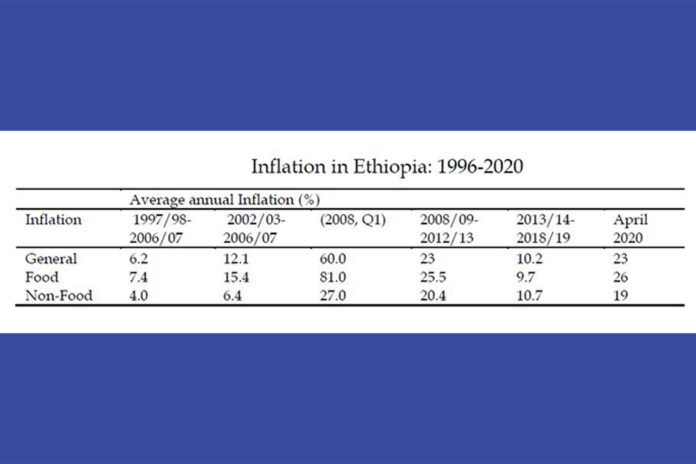 Dissecting the exponential inflation rates over the years

After the 2005 election, the government was quick to set a growth path that was driven ‘partly targeting to politically impress the public.’ This path is stated as one of the major reason for spiral inflationary trends of the country until now.
The government would later be in a dilemma to choose either economic growth or neutralize inflation. A new study has revealed its recommendation for the government to focus on food investments at the cost of the other sectors to curb the food inflation.
The latest study conducted by two senior economists stated that in Ethiopia, inflation was not generally an issue before the 2005 controversial election and the violence that follows it. “The latter is important as it contributed to the change in the modality of growth financing which we believe is resulted in the macroeconomic imbalances witnessed,” the study reads.
“It was followed by the behavior of high inflation, significant parallel market premium of the currency, shortage of foreign exchange, significant trade balance and fiscal deficits and huge debt that characterized the Ethiopian macro economy today,” states the study that was carried out by Alemayehu Geda, Professor at Addis Ababa University and Kibrom Tafere, Professor at Cornell University under the title of ‘The Challenge of Inflation and Financing Development in Ethiopia: A Kaleckian Approach with Empirical Result’.
The study recalls that before 2005, the government exercised prudent fiscal and monetary policies which were institutional legacies from previous regimes, while it argued that the macroeconomic instability occurred when the government became reluctant to continue the strict trend.
“These macro challenges began to emerge following the government’s move towards laxer monetary and fiscal policy and significant state activism informed by its version of a developmental state,” the study explained.
The study explains that the government’s decision to pump huge amounts of money by borrowing from the National Bank of Ethiopia to fill the budget gap as well as foreign loan has played a major role to the skyrocketing inflation that was not higher than five percent for decades.
The study further recalls that, the official headline inflation for the first quarter of 2008 stood at 60 percent with food inflation being about 80 percent.
It is said that this has declined over the years, but not significantly, and the latest (April 2020) data shows a general inflation level of 23 percent and a food inflation of 26 percent.
This is a huge macroeconomic shock given the price history of the country where inflation for the last five decades before the early 2000, was below 5 percent per annum. What is more alarming is that the poor are the major victims of this inflationary phenomenon as they spend significant part of their income on food and other basic goods.
In this study an attempt to identify the forces behind the inflationary challenge in Ethiopia was looked into keenly.
The study was done using the Kaleckian approach to inflation and financing development in developing countries as an overarching theoretical framework. The study found weak domestic food supply, a rising money supply and exchange rate depreciation (devaluation) to be the three major factors behind inflation in Ethiopia.
The effect of these major determinants is also found to have different potency in the short and long run, as well as across the three versions of the inflation models estimated. In addition, imports of food items, economic growth and price of imported goods are also found to have effect on the level of inflation in Ethiopia.
“We are also able to come up with specific elasticity values of inflation with respect to each of these determinates that could inform policy aimed at abating the double-digit inflation that is disproportionally hurting the poor and fixed-income earners in the country,” the study said.
The nature of financing development since the 2005 failed election seems one of the major reasons behind the high inflation and related macroeconomic instability in the country today.
The study reminded that following this failed election and the government violence on civilians, donors protested by reducing aid as well as changing its mode of delivery from ‘budget support’ to ‘provision of basic services’ directly.
“Confronting with the latter, and yet wanting to register rapid economic growth partly to politically impress the public (especially in the disfranchised urban areas), the government has resorted to high investment and a significant monetization of the deficit. This is complemented by significant borrowing from China,” it argued.
The study recognized the economic growth in the past over a decade but said that, the financing of this growth is problematic and was the major factor behind the inflation and severe macro imbalances witnessed in the country later.
“Despite the double-digit growth noted, inflation became a double-digit figure too. This positive co-movement between the two is puzzling that led many even to suspect the credibility of the official growth data,” it explained.
The study argued that the inflation severely affects the poor since it mainly spiked the price food than non food products because of un-increased food supply in the economic development that the government claimed double digits for over a decade.
“Food expenditures constitute the lion’s share of household expenditures in Ethiopia. In 2006, for example, its share in total expenditures was 57 percent. This did not change much today, being about 54 percent in 2019,” it says, “Thus, the effect of a rise in food price on general price level and social welfare is significant. Generally, food inflation increased faster than the general inflation during the period under analysis.”