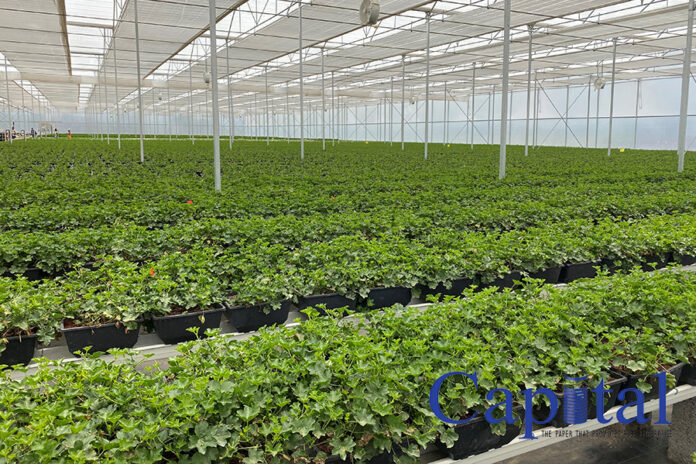 The state of the art horticulture facility, Zuqualla Horti PLC successfully exports the first batch of its cuttings flower to the European market this week.
Recently, the high tech farm which converted to cuttings partly from the former strawberry production stated that its plan was to start exports by November this year; however it has achieved it before the projected timeline.
The cuttings business that is rare but economically lucrative for the country has now seen additional player besides the five players who are engaged currently.
According to a statement from the Ethiopian Horticulture Producers Exporter Association (EHPEA), Zuqualla Horti, formerly Ilan Tot Strawberry Farm in Qoqa, 91km south east of Addis Ababa, last Wednesday 27th October successfully exported its first cuttings to the European market. This comes at a time where the farm has been growing as a result of the 10 month investment phase which is still ongoing.
“After starting construction last January and planting the first batch in July, this is a huge milestone for the company and the country’s horticultural sector. Being the 6th ornamental cutting producer- and exporter in the country, it can give extra strength and boost to attract other cutting producers in the future,” the statement added.
Zuqualla Horti PLC’s ultramodern greenhouse facility at Qoqa, built on 5.5 hectare of land, holds a complete automized climate system, fully equipped with moveable screens and LED grow lights, as well as a gutter recycling system for all drain water.
“Depending on the quality and feedback from our customers and how successful we can get through our first export season, plans are there to expand the greenhouse facility with another 2.2 hectares,” Wout van Koppen, the company’s General Manager, said.
Zuqualla Horti PLC, founded in 2005 originally being a pioneer in growing and exporting strawberry’s, welcomed its new investor EMS Flower, European largest ornamental producers company by the end of 2020. The new company has promised that the fresh hands will continue on the same facility with better business.
The company stated that the strawberry export will also continue, while it will be transferred in hydrophonics growing system in tunnel greenhouses farming to increase yields and export value from the current open field.
In the past half year, the company was engaged on the development of five greenhouses that lies on 1.1 hectares each and prepared them for cuttings production and some of them are already at the nursery stage.
In August, Bennie Uoipers, owner of EMS Flower, told Capital that the new business so far consumes 7 million euro, while most of the finance is covered by itself and financial sources in Dutch.
Zuqualla initially targeted the exports to come about in November but has since surpassed its projection by exporting the cuttings much earlier than anticipated, explained the farm manager.
Mekonnen Solomon, Horticulture Export Director at Ministry of Agriculture, told Capital the latest news from Zuqualla is not only horticulture activity or export earnings but it has massive meanings for the country’s economy at large.
The cuttings business is different compared with other floriculture activities, “the job creation per hectare is over 38, which is very high compared with other rose and cut flower production and even manufacturing industry. It is also different in earnings and high tech that has a contribution for the sector.”
Recently, Wout van Koppen, General Manager of Zuqualla Horti, told Capital that the cutting business is very labour intensive and requires high tech, “thus if you compare the cutting business let’s say to rose farms and other cut flowers, that is a very different story.”
In the first year the company targets to export 25 million cuttings. Under the plan, the company has targeted to expand the greenhouses routinely at its compound.
The company currently has a workforce of 550.