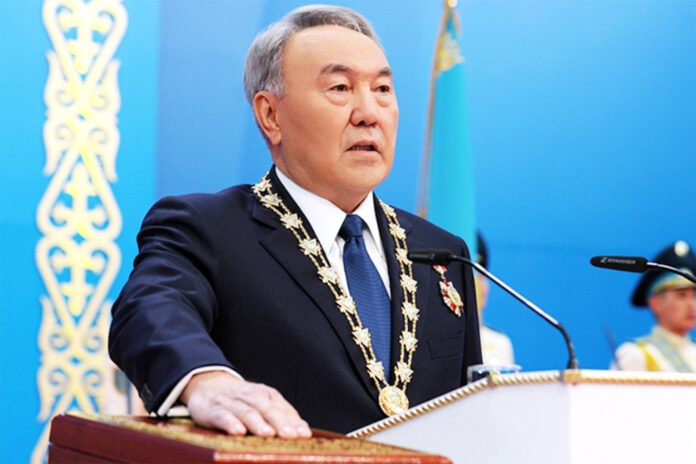 The leader of the state attached a special role to the establishment of a national security system and pursued a balanced multi-vector policy, the essence of which was to establish and develop mutually beneficial cooperation with other countries. The consistent multi-vector foreign policy of Kazakhstan is recognized worldwide. Kazakhstan is championing for a world free of nuclear weapons and nuclear non-proliferation regime. Kazakhstan closed the Semipalatinsk test site and voluntarily abandoned the huge nuclear potential inherited from the Soviet Union, which was the world fourth largest. In the last decade, Kazakhstan has chaired, among others, the Organization for Security and Co-operation in Europe, Organization of Islamic Cooperation, and Shanghai Cooperation Organization. As the first ever Central Asian country Kazakhstan  was elected a non-permanent member of the UN Security Council for 2017-2018.

In a short period of time Kazakhstan transformed into a modern, advanced state, part of the group of the 50 most competitive countries in the world. The country has managed to accumulate large financial resources in its National Fund, which makes it possible to solve important socio-economic tasks in crisis situations. Kazakhstan is leading, in terms of foreign direct investment per capita and has attracted more than $350 billion in foreign direct investments.  Kazakhstan now ranks 25th among 190 countries in the World Bank Doing Business index and 58th in the human development index. The literacy rate reached 99.8 percent.

First President N. Nazarbayev is the chief architect of integration processes in the Eurasian space. Evidence of this is the realization of his initiative on the creation of the Eurasian Economic Union (EAEU) in 2015.

A special place in the policy of the First President of Kazakhstan was the issue of interethnic relations. Kazakhstan is a multi-ethnic country where representatives of 130 ethnic groups live. The President was able to turn the multinational factor into the true heritage of the republic. Thanks to the wise, balanced and flexible policy of the Leader of the nation, our republic has overcome the difficulties of the transitional period and managed to avoid conflicts on ethnic grounds. The President of the country created a unique institution – the Assembly of the People of Kazakhstan, an advisory body under the Head of State, the main purpose of which is to ensure equality of rights and freedoms of citizens, regardless of their nationality, language, religion, membership of social groups.

Yet another significant contribution to peace is the initiative of N. Nazarbayev to hold the Congresses of Leaders of World and Traditional religions, which are conducted in Kazakhstan at triennial bases.

Our First President significantly contributed towards the construction and development of our new capital. Its establishing is a historic feat of the Head of State. Our capital has become a true image of an independent country, the pride of our people. The capital is a sacred representation of the concept and ideology of the new state. On the initiative and decision of the parliament, supported by the population, the capital was named in honor of its creator – Nur -Sultan.

In spring last year N. Nazarbayev voluntarily relinquished his powers after serving 30 years as the President of Kazakhstan. He stated that he sees his future task in ensuring the coming to power of a new generation of leaders who will continue the transformation process in the country. This important decision of the Head of State showed his greatness as a politician, it was motivated by considerations of the highest order, true concern for the future of Kazakhstan.

On June 9, 2019, early elections of the President of the Republic of Kazakhstan were held. Kassym-Jomart Tokayev was elected as the new President of Kazakhstan. Thus, a peaceful transition of power in Kazakhstan took place, political succession was announced and all priorities and goals of foreign policy of Kazakhstan will remain unchanged.

Kazakhstan is interested in expanding ties with Ethiopia, given its growing role in world affairs and the global division of labor. Kazakhstan sees Ethiopia as a friendly country and a major partner in Africa. Kazakhstan people have deep respect for the Ethiopian people, their rich culture, art, traditions and kindness of a national character.

We are witnessing radical reforms underway in Ethiopia that are aimed at the full-scale transformation of the country’s economy in order to improve the standard of living of citizens, as well as strengthening national unity and regional integration both in the Horn of Africa and on a continental scale.

Kazakhstan welcomes these transformations and wishes success in achieving  their goals.

Author of article is H.E. Mr. Barlybay Sadykov, Ambassador of Kazakhstan to the Federal Democratic Republic of Ethiopia.

HR transformation in the new normal

THE AFRICA WE STRIVE FOR IS POSSIBLE IN UNITY AND SOLIDARITY

Dedebit officially dispersed its Women’s side

The Issue of International Economic Law