Prime Minister Abye Ahmed rejects (I assume) all attempts at state capture by the nouveau riche. So do we!
So why did AA expose himself by attending the very first attempt by local tycoons to undermine his integrity. Surely this prime minister is smart enough to know the whole stage got nothing to do with Ambo? Still he chose not to connect the dots. Apparently the richest man of the day coughed up ETB 5 million for a watch (The PM’s watch), other tycoons did not disappoint either. Lucky Ambo!
Watching the PM as Chief fund raiser – there’s something so EPRDF about that!
Anyway, it’s necessary to ask why state capture should worry us all beyond anything else happening in the country right now. State capture is when the legitimate state is being stolen by a small cabal of robber barons. It’s not something that happens over night, but develops over years.
We’ve seen it during the past administration when these very same moguls took turns in ‘contributing’ millions for this, or that cause, in return for a good break! Yes, dear reader these are people who figured it out how to game the system, using the government’s muscle to get what they want. That’s why they’re willing to spend millions of Birrs to just shake hands with the PM; they know it will pay off.
When government has the power to grant favors, cronies will seek those favors out. At this stage of the new administration there may not be a grand strategy (…yet), beyond undermining the administration and creating a more conducive environment for themselves, but things can change quickly.
Which takes us straight to Hemingway’s conversation between Bill and Mike in ‘The Sun Also Rises’
Bill asks; “How did you go bankrupt?”
Mike replies: “Two ways. Gradually. Then, suddenly.”
We’re still in the ‘gradually’ phase.
But isn’t PM Abye’s government supposed to be kosher?
It’s supposed to be. Except the theories of clean government are mostly wishful thinking, fiction, and claptrap. Government is raw force…it’s known to transfer wealth and status to the insiders who control it. The reason why democratic government prevailed is not because power is vested in the people…no! It’s because government gives more people the illusion of choice and freedom…and welcomes more people as insiders (however modest their participation).
As time goes by, more and more cronies get special deals, contracts, jobs, privileges, bailouts, protections and redistributions. Eventually, they push us all into a nation of favor-seekers instead of creators and producers. Then, reform is practically impossible. The political system is entirely under the control of the fakes. The only resolution of this is catastrophe – either in the form of bankruptcy, revolution, war or some combination.
In Ethiopia top party officials are the enablers of State Capture. At least, that is what you hear in the street. But we’ll give it to you straight, dear reader, there has never been any systemic attempt to fight corruption in the past, and there isn’t today. Yes, there have been few attempts to tackle corruption, but trust has long been broken down between individuals and most institutions. Regaining some of the trust at least will take time and effort.
So why did the PM fell into the trap? We don’t know.
But what we know dear reader is the future of Ethiopia is both an individual and a collective challenge. Even with the recent change of leadership, people feel as if they are in a very particular time of local tension. Yet we have a window of opportunity, a second chance, which calls for the very opposite of despair, for greater mobilization and the true awakening of citizen activism for progressive values and corruption-free societies to thrive. Let’ us not mess it up!

Ethiopian Airlines Group to Set up Aircraft Seat Cover and Other... 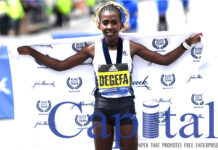 We Are Many We Are One