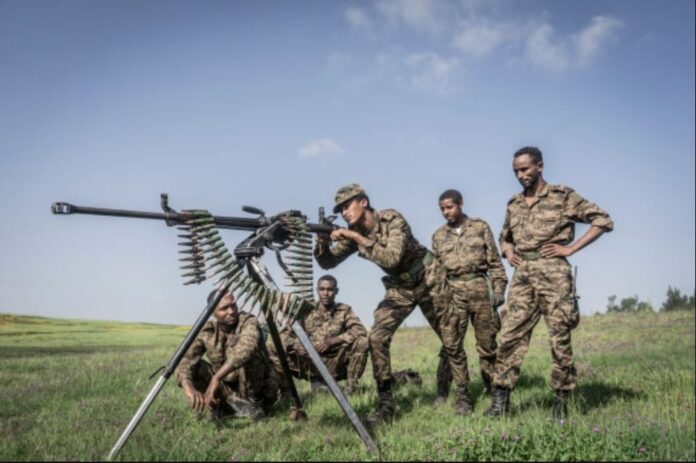 Amb. Dina Mufti, Spokes Person of the Ministry of Foreign Affairs, said, The Ethiopian government forces recaptured Shewa Robit, a town which was claimed last week by fighters from the Northern Tigray Rebels. Shewa Robit was among several towns retaken by Ethiopia’s army and regional forces loyal to their beloved Nation. In Shewa front, the Mezezo, Molale, Shewa Robit, Rasa and its surroundings have been freed from the terrorist TPLF.

The capture of Lalibela, home to ancient rock-hewn churches and a holy site for millions of Ethiopian Orthodox Christians is a significant symbolic gain for the government and our beloved nation.

The construction of eleven rock-hewn churches is attributed to King Lalibela. The buildings are monolithic, carved from a sloping mass of red volcanic scoria underlaid by dark grey basalt and interconnected by a maze of tunnels and passages with openings to hermit caves and catacombs.

The government would “in a short period of time” retake Dessie, Kombolcha & Woldia even as fighting reportedly rages on at least four fronts. The army on Eastern front controlled the lowland Afar town of Chifra, Askit, Alele, Sulula, Burka, Chirtu, Waema and Diroka and PM Dr. Abiy said such gains would be replicated in all parts of the Amhara region where Dessie and Kombolcha lies.

Al Jazeera, however, was able to gain exclusive access to Chifra and surroundings the first international news organisation to witness so. The scenes we witnessed are appalling,” Al Jazeera Arabic’s correspondent Mohammed TahaTewekel reported from Chifra town.

“TPLF Rebels dead bodies everywhere on the streets … proof of the ferociousness of the fighting. There are clear signs of defeat on TPLF in this conflict. The town’s commercial shops were totally destroyed; by TPLF even the mosques were not spared. All the residents have been fled for their lives but now back home.”

Meanwhile, Ethiopia’s foreign ministry on Wednesday tweeted images of a press briefing by China’s top diplomat Wang Yi during his visit to the country, quoting him as saying: “China stands against any interference in Ethiopia’s domestic affairs.

China’s foreign minister Wang Yi arrived in Addis Ababa, prompting Ethiopia’s foreign ministry to thank him in a tweet for “disregarding the unfounded rhetoric on the deteriorating security situations in the country”.

The twin developments are a boost for Prime Minister Abiy Ahmed’s government, and Wang’s visit served as a pointed reminder to Western governments pressing for a ceasefire that Ethiopia maintains other alliances.

The reported gains in Amhara followed news over the weekend that government troops had retaken many towns in Afar and Amhara region after PM Dr. Abiy left the capital Addis Ababa to direct fighting from the frontlines.

Ethiopian soldiers also now controlled 10 towns and villages, Northeast of Addis Ababa. Gains by the military in Afar and Amhara was a blow to Tigrayan forces, who had threatened to either advance further southwards through Amhara and march on the capital, or head eastwards and threaten a road linking landlocked Ethiopia to the region’s main port, which was a crazy spirit.

Reuters spoke two people who originally lived in Lalibela and fled the fighting. They said relatives had called and said Tigrayan forces had been destroyed and pushed out from the town; Reuters

Long list of Mediators have been tried to make arrangements on round table discussions, President Salva Kiir of the Republic of South Sudan, President Recep Erdogan of Turkey, Amb. Jeffrey D.Feltman of USA, Former President of Nigerian, Olusungo Obasanjo were among others.

President Salva Kiir of The Republic of South Sudan encouraging the government and Tigrayan forces to sit down and identify their problems and later on declare a ceasefire to allow ways for serious mediation.

Amb. Nebil Mahid, Ethiopian Ambassador to the Republic of South Sudan, said, Ethiopia, Africa’s second largest nation and a regional diplomatic heavyweight, was once an ally for Western security forces seeking to counter Islamist extremism. But relations have soured amid increasing allegations of major supports towards the Terrorist Group of TPLF.

Chinese foreign minister Wang’s visit served to underscore Ethiopia’s rejection of what it describes as interference by Western nations, many of whom have ordered their citizens to leave Ethiopia immediately.

PM Dr. Abiy Ahmed, said, “The youth of Tigray is perishing like leaves. Knowing it is defeated, it is being led by one who does not have a clear vision or plan,” “It should surrender today to the Ethiopian National Defence Force, to the special forces, to the militias and to the people.” This time around footage was the latest in a series of clips showing Abiy, in uniform with soldiers, in what appeared to be the north-eastern region of Afar and Amhara.

Amb. Fesseha Shawel, Director General of Neighbouring countries and IGAD affairs, said, The area has been the site of fierce fighting in recent weeks as the Tigray People’s Liberation Front (TPLF) rebel group tries to seize control of a critical highway that supplies the capital Addis Ababa, which is a sick jock.

The army on Gashena Front controlled the towns of Arbit, Akat, Debo and Gashena surroundings and PM Dr. Abiy said such gains would be replicated to the other part of the region. “The enemy has been defeated. We scored an unthinkable victory with the eastern command in one day now in all parts of the front we will repeat this victory,” he said.

Orchestrated propaganda of Western Media of a rebel march on the capital have prompted the United States, France, the United Kingdom and other countries to urge their citizens to leave Ethiopia, though PM Dr. Abiy’s administration says TPLF gains are overstated and the city is secure as well as  in a very stable condition. Diplomats led by Olusegun Obasanjo, the African Union’s special envoy for the Horn of Africa, are trying to broker a ceasefire, though there is no progress so far.

War or uneasy peace? What 2022 heralds for US-China relations

The story of China-American rivalry

Your $1.7 billion of gold is now ours, UK tells starving Venezuelans