Tuesday August 15, 1961 is the day I was born in Kingston Jamaica, shortly after Jamaican Independence Day. Middle child, only girl, typical uptown multi-generational Jamaican family, meaning; Catholic school, dance and deportment classes, Sunday outings to beautiful beaches or lush country-sides and typical JA music and theater productions; my island life. By the early 70’s, my brothers and I joined my mother in New York. Spring boat rides to the Statue of Liberty; winter ice-skating and holiday shows at the famous Rockefeller Center; and summertime fun on the block in the Bronx, best describes my tweens. Notwithstanding the great childhood memories; I also recall nasty glares, lowering of report card grades, and from the daring, a “N….r go back on the banana boat” refrain. This early exposure introduced confusing terms, racism and injustice, which remain prevalent in my lexicon to date.
By the teens I was eager to comprehend and compartmentalize this strange social experience/experiment. Rastafari music and art from Jamaica were the Go-To. Bob Marley & The Wailers, Burning Spear and Culture provided conscious lyrics; while the counter-culture charcoal drawings of Daniel Hartman denoted self -determination. On the US front, Stevie Wonder and Afro-Futuristic Earth, Wind & Fire inspired me; as authors Richard Wright and Claude Brown sparked my imagination with prose on Black tragedy and triumph. Creativity was flowing and an opportunity arose to organize my first cultural event by 10th grade, aimed at easing tensions between Jamaican and African American students locked in cultural conflict. Ironically, both were facing discrimination in our suburban high school. Perhaps these circumstances triggered my twin path in the arts and social activism.
By the late 80’s, marriage and children shared the space with my activism and artist management firm. I represented reggae icons Augustus Pablo, Judy Mowatt and Rita Marley and the 90’s would bring Nigerian Sonny Okosuns and other artists on board. All were musical messengers of social consciousness, informed by Rastafari and the Pan African Movement. Tours to Europe and Africa were activated in ’92, with my first visit to Lagos that same year. Work with visual artists and photographers on album covers, concert posters and press kits intensified. By the way, this was waaay before photo shop.  By 2001 seeds were re-sown in Ghana, my ancestral home, through my work with the Bob and Rita Marley Foundations. Dr. “Nana” Rita Marley moved there to build farms, schools, health centers, wells and more. That same year, and with ten children in tow, I earned a Juris Doctorate from the University of Florida (UF), got hired as the Ag. Director for the UF College of Law Center for Race and Race Relations and assumed the role of Black Law Students advisor; also finding time to mentor budding entertainment lawyers. But in 2004, Dr. Rita Marley presented an offer I could not refuse, to serve as the Managing Director for the Bob Marley Foundation. By September of the same year, the Queen of Reggae Music and I arrived in Addis Ababa to celebrate Ethiopian New Year and begin the coordination of Africa Unite, Bob Marley’s 60th Birthday hosted at Meskel Square, February 2005. The event hoisted the banner for African unity through music, art and culture while raising funds for youth centered initiatives.
Four short months after, I moved to Addis Ababa with my children, established a consultancy and curated my first exhibition at Taitu Hotel. The show was co-curated by Artist Merid Tafesse, who unbeknownst to me at that time would become my husband. Merid took up the assignment as Art Director and helped me launch DYMDC Children’s Village Project. We provided art, dance and music lessons along with hot meals and baths for up to 100 homeless, orphaned and vulnerable children per day in the Arat Kilo/Piassa area. Art healed them, freed them and gave them comfort, even if it was just for the 2-4 hours per day. After five years, urbanization halted the project and Merid and I worked from our Kazanches home and studio, focusing on fine art. Desta Hagos, Daniel Taye, Worku Mamu, Tamrat Gezeghen and the late Tadesse Belayneh amongst others would also entrust me to curate exhibitions locally and internationally.  I was also privileged to curate exhibitions on migration, human rights and the economy of art with a couple of internationally acclaimed shows at the National Museum including RasTafari: The Majesty & The Movement, named “…blockbuster exhibit of the year…” by the New York Times.
Finally, as I celebrate my b-earthday with you dear readers, sharing my life in art or my artful life, in the hopes of motivating advocates for the arts, I smile. Why? I am blessed with access to the most powerful and persuasive transformational tools, the arts, and I am using them for the greater good of Africa.

Ethiopia’s export will show a 14 percent growth this year: Report 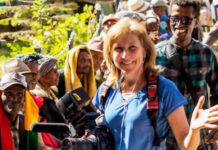