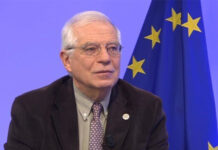 ﻿The Future of the African Fine Art Industry

The cost of coronavirus in Africa: What measures can leaders take?

WHAT ABYE AHMED MUST DO NEXT