ETHIOPIA, WHERE HOPE IS ETERNAL

Addis International Film Festival to kick off on Tuesday 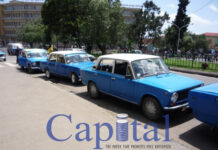