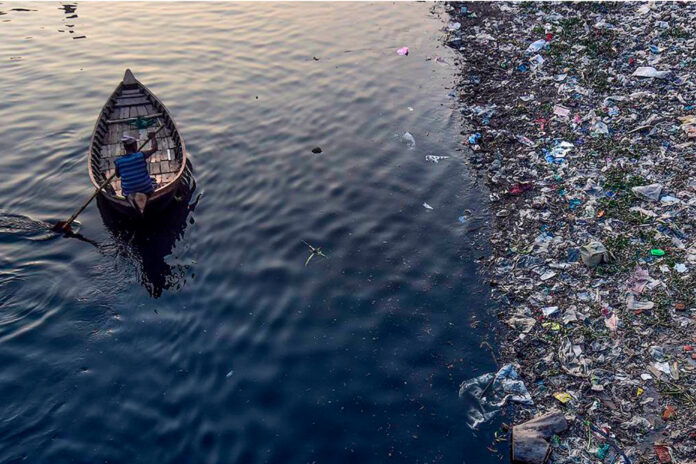 The world’s rivers are under unprecedented pressure from contamination, damming, and diversion, which are straining water resources, destroying ecosystems, jeopardizing livelihoods, and damaging human health. International cooperation can save riparian systems, but first we must recognize the consequences of doing nothing.

By Brahma Chellaney
From the Tigris to the Indus and the Yangtze to the Nile, rivers were essential to the emergence of human civilization. Millennia later, hundreds of millions of people still depend on rivers to quench their thirst, grow food, and make a living. And yet we are rapidly destroying the planet’s river systems, with serious implications for our economies, societies, and even our survival.
China is a case in point. Its dam-building frenzy and over-exploitation of rivers is wreaking environmental havoc on Asia, destroying forests, depleting biodiversity, and straining water resources. China’s first water census, released in 2013, showed that the number of rivers – not including small streams – had plummeted by more than half over the previous six decades, with over 27,000 rivers lost.
The situation has only deteriorated since then. The Mekong River is running at a historically low level, owing largely to a series of Chinese-built mega-dams near the border of the Tibetan Plateau, just before the river crosses into Southeast Asia. In fact, the Tibetan Plateau is the starting point of most of Asia’s major rivers, and China has taken advantage of that, not least to gain leverage over downstream countries.
China may be the world’s largest dam builder, but it is not alone; other countries, from Asia to Latin America, have also been tapping long rivers for electricity generation. The diversion of water for irrigation is also a major source of strain on rivers. In fact, crop and livestock production absorbs almost three-quarters of the world’s freshwater resources, while creating runoff that, together with industrial waste and sewage discharge, pollutes those very resources.
In total, almost two-thirds of the world’s long rivers have been modified, and some of the world’s longest – including the Nile and the Rio Grande – now qualify as endangered. Of the 21 rivers longer than 1,000 kilometers (620 miles) that still flow freely from their mountain sources to the sea, most are in remote regions of the Arctic and in the Amazon and Congo basins, where hydropower development is not yet economically viable.
These trends strain water resources, destroy ecosystems, and threaten human health. For example, heavy upstream diversions have turned the deltas of the Colorado River and the Indus River into saline marshes. Moreover, lower river-water levels impede the annual flooding cycle, which in tropical regions helps to re-fertilize farmland naturally with nutrient-rich sediment. In periods of below-average rainfall, a number of rivers increasingly run dry before reaching the ocean, and even when they do make it, they are depositing less of the nutrients and minerals that are vital to marine life.
Globally, aquatic ecosystems have lost half of their biodiversity since the mid-1970s, and about half of all wetlands have been destroyed over the last century. A recent United Nations study warned that up to a million animal and plant species are threatened with extinction, many within decades.
Humans are hardly exempt from the health consequences of river destruction. In Central Asia, the Aral Sea has all but dried up in less than 40 years, owing to the Soviet Union’s introduction of cotton cultivation, for which water was siphoned from the sea’s principal sources, the Amu Darya and Syr Darya rivers. Today, particles blown from its exposed seabed – thick with salts and agricultural chemical residue – not only kill crops; they are sickening local people with everything from kidney disease to cancer.
Free-flowing rivers play a critical role in moderating the effects of climate change, by transporting decaying organic material and eroded rock to the ocean. This process draws about 200 million tons of carbon out of the air each year.
In short, the case for protecting our rivers could not be stronger. Yet, while world leaders are often willing to pay lip service to the imperative of strengthening river protections, their rhetoric is rarely translated into action. On the contrary, in some countries, regulations are being rolled back.
In the United States, almost half of rivers and streams are considered to be in poor biological condition. Yet last October, President Donald Trump’s administration repealed “Waters of the US,” which had been introduced by his predecessor, Barack Obama, in order to limit pollution of streams, wetlands, and other bodies of water. Last month, the Trump administration replaced the rule with a far weaker version, called the “Navigable Waters Protection Rule.”
Likewise, in Brazil, President Jair Bolsonaro has relaxed environmental rules in the name of economic growth. Among the casualties is the Amazon River, the world’s largest river in terms of discharge, which carries more water than the next ten largest rivers combined. Already, the Amazon basin in Brazil has lost forest cover over an area larger than the entire Democratic Republic of Congo – the world’s 11th-largest country.
The absence of water-sharing or cooperative-management arrangements in the vast majority of transnational river basins facilitates such destruction. Many countries pursue projects without regard for their cross-border or environmental effects.
One way to protect relatively undamaged river systems – such as the Amur, the Congo, and the Salween – would be to broaden implementation of the 1972 World Heritage Convention, and add these rivers to the World Heritage List, alongside UNESCO World Heritage Sites. This would be in line with recent efforts in some countries – Australia, Bangladesh, Colombia, India, and New Zealand – to grant legal rights to rivers and watersheds. For such initiatives to work, however, effective enforcement is essential.
As for the rivers that are already damaged, action must be taken to restore them. This includes artificially recharging rivers and aquifers with reclaimed wastewater; cleaning up pollution; reconnecting rivers with their floodplains; removing excessive or unproductive dams; and implementing protections for freshwater-ecosystem species.
The world’s rivers are under unprecedented pressure from contamination, damming, and diversion. International cooperation can save them, but first we must recognize the consequences of doing nothing.

Brahma Chellaney, Professor of Strategic Studies at the New Delhi-based Center for Policy Research and Fellow at the Robert Bosch Academy in Berlin, is the author of nine books, including Asian Juggernaut, Water: Asia’s New Battleground, and Water, Peace, and War: Confronting the Global Water Crisis.

Building “Baby” Dams to Fund the Mega Dam: “Owners” vs. “Guardians” of the Nile

We cannot afford another India to prevent a catastrophic third wave of COVID-19 in Africa, look at data to drive the response

Why to Consider Rebranding?

The race for the lucrative wheat bid

Informal Essay Writing has to Thrive in Ethiopia