The writer can be reached, araya.gedam@gmail.com

Ding-Dong ! The Bells Are Tolling! It is a Wakeup Call All Countries of The Nile Valley! 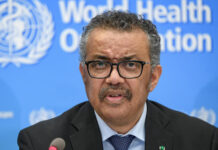 From sport to raw meat