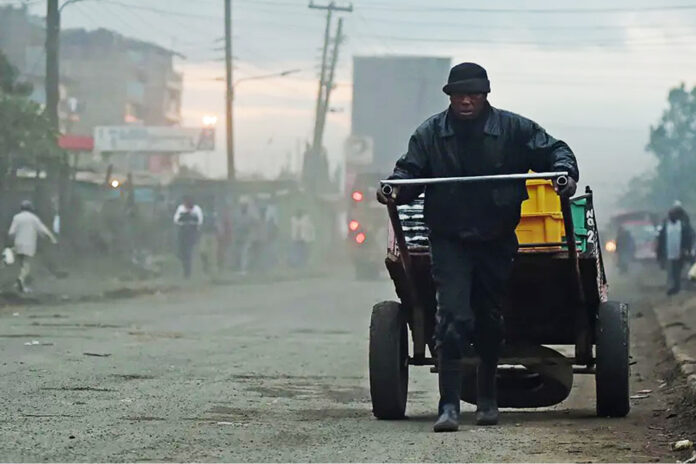 The global coronavirus pandemic is having a devastating effect on economies worldwide. However, one of the few positive consequences of travel restrictions and industrial downturn has been a temporary reduction in air pollution. This has made skies cleaner and clearer.
In Kenya’s capital, Nairobi, residents have documented this, reporting that they can now see two prominent mountains – Mount Kenya and Mount Kilimanjaro – from the city. It’s a view they haven’t enjoyed for decades.
Similar examples have been seen in other cities around the world where short-term visibility – our ability to see blue skies – has improved due to the coronavirus lockdown effect.
So why have Mount Kenya and Mount Kilimanjaro not been seen for years? This is because visibility is mainly influenced by small airborne particles, often called particulate matter. These are generated through anthropogenic causes – such as traffic emission, power plants, factories, and crop burning – or natural causes – such as forest-fires, sea salt, dust, and volcanic eruptions. The particles scatter sunlight, thereby reducing visibility. So the more particles, the more pollution.
The evidence shows that the air pollution levels in Nairobi, as with other East African urban areas, are currently at unhealthy levels. But there are very few studies and a lack of systematic and regulatory grade measurements of air pollution in East African cities. The existing data only tells us about the current air quality – there’s no historical data to compare it with.
It’s important to know how much more air pollution there is because it can have significant impacts on our respiratory, cardiovascular, metabolic, and neurological systems. To this end, A Systems Approach to Air Pollution (ASAP) brings together leading UK and East African academics to provide a framework for improved air quality management.
We recently carried out a study to fill the gap in information in three East African cities: Addis Ababa, Nairobi and Kampala. The study period was from 1974 to 2018.
We found that air pollution levels in Nairobi increased by 182% over the study period, Kampala by 162% and Addis Ababa by 62%.
This new data set provides a much-needed air pollution baseline for the three cities. They can now assess how effective current and future efforts to reduce air pollution are.
Visibility data
For our study, we used visibility data to predict how much particle pollution there was. Visibility measurements are routinely recorded at airports and other locations, and so we were able to use this data for our research.
Before the 1990s visibility was usually measured manually. Afterwards light sensitive instruments were used, such as visiometer sensors. Crudely, visiometer sensors measure how much light is scattered by particles and thus dictates visibility.
We found that, over the last 45 years, Nairobi has experienced the most loss in visibility (60%) – for instance the average visibility dropped from about 35km to 14km from the 1970s to 2010s. Next with the most loss in visibility was Kampala (56%), followed by Addis Ababa (34%).
From this data we were able to calculate the air pollution levels. Simply put, visibility depends on how many particles there are, so we are able to model this into how much pollution there is. Crudely, the more particles, the lower the visibility – which means the more pollution.
This visibility approach is also translatable to other regions worldwide and can be particularly useful for locations that lack high quality, long term air quality monitoring.
Visibility approach
Over the past 50 years, clear sky average visibility has reduced all over the world. This is indicative of changes in particle, gas emissions and climatic conditions.
In the case of these three African cities, the study linked increased particulate matter pollution to increased rates of fuel use, motorisation and socio-economic development. This influences the city’s air quality because of large-scale construction, energy use, and increased vehicle emissions. In Kenya, for instance, there was a notable increase (200%) in the number of vehicles on the roads over the past decade.
Besides East Africa, many cities in India, and China are also facing visibility degradation due to increased air pollution levels, while visibility significantly improved in European cities. Improved long-term visibility in European cities is the result of decreasing air pollution there, possibly due to the results of successful air quality policies.
Air pollution
We hope this approach will be used to assess future air quality improvement interventions in the region.
Air pollution is an important environmental problem and a major public health concern due to its significant adverse toxicological impact on human health. Globally, the World Health Organisation estimates that 7 million people die prematurely each year due to exposure to harmful levels of air pollution. More than 90% of deaths occur in low and middle income countries.
Our evidence shows that while urban growth is an inevitable product of national development, there is a critical need for actions to be taken that ensure that urban development does not take place at the expense of good air quality.
(The Conversation)

Where is the Country for Young Men?

Why should we read every day?