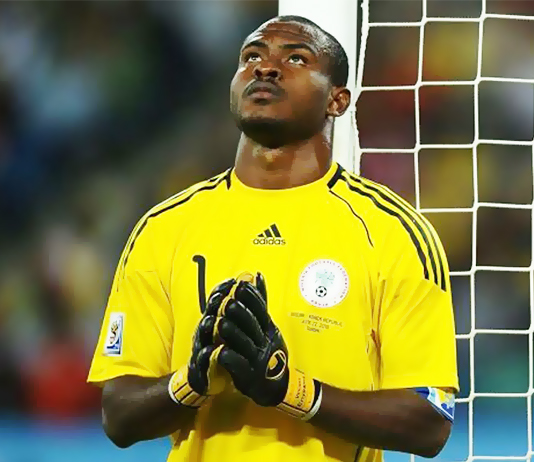 Born in 1982 in Aba, Vincent Enyeama grew up in the university city of Uyo, alongside his father (coach) and half-brother Aniekan (former Auxerre player). From a young age, he opted for the goalkeeper position, as a big fan of the legend Ewin Van Der sar. In the 2010s, the former Nigerian international was considered one of the great guardians of League 1.

Nigeria’s iconic former Super Eagles goalkeeper made his debut in football back home. Besides, his country nigeria has enough visitors on https://22bet.co.tz/ His first contract came very quickly, and this with the club of Ibom Star where he will impose himself as indisputable. He will score a goal in spite of his position. After this adventure, he bounced back to Enyimba where he will play for 4 years. This period at the top level will allow him to win his first selection with the national team of Nigeria where he was summoned for the 2002 World Cup. But he will only be the replacement of Ike Shorunmu. But in 2004, his career really started in selection and there, he will play a lot of matches with his nation, even in club situation. He will join Iwuanyanwu, the current Hertland Football Club, in 2005 with a total of 36 games on the season before flying to Israel.

His visit to Israel in Lille OSC

It is in Israel that Enyeama will have his first experience outside his country. He joined the Israeli club Bnei Yehudah FC where he will even play a continental cup, the UEFA Cup. In 2007, he will start a new adventure at Hapoël Tel-Aviv, a club well known in the championship. In this new club, he will play a total of 164 TCC matches in 4 years. He will have the chance to contest both the Europa League and the Champions League. In 2009-10, he will have an exceptional season, certainly the most important of his career.He played 47 club games and scored 9 goals, just incredible for a goalkeeper. In selection, it is a total of 14 selections.

After this magnificent season in 2010, he will hit the eye of several European clubs. But finally, he will engage with the LOSC, in Ligue 1. He became, after his arrival, the second guard of the club after Mickaël Landreau. Unhappy with his replacement position, he asked for a loan departure in Israel at the end of the 2011-2012 season. Thus he will engage with Maccabi Tel-Aviv, rival of his former club Hapoël Tel-Aviv. Returning to Lille after his loan, he became number 1 under the orders of René Girard, his new coach. This was during the 2013-2014 season.

In 2020, Vincent Enyeama joined the Iris Club de Croix as coach of the U16 (reserve team). But long before that, he had already announced the end of his professional career.

With Enyimba FC, Enyeama won the CAF Champions League in 2003 and 2004 and the CAF Supercup in 2004. In Israel, he won the champion in 2010, the Israel Cup in 2010 and 2011 under the colours of Hapoël Tel-Aviv. In 2013, but now with Maccabi Tel-Aviv, he won the Israeli championship once again. With Lille OSC, he won nothing, but was a finalist in the League Cup in 2016. With the Super Eagles of Nigeria, he will be crowned African champion in 2013.