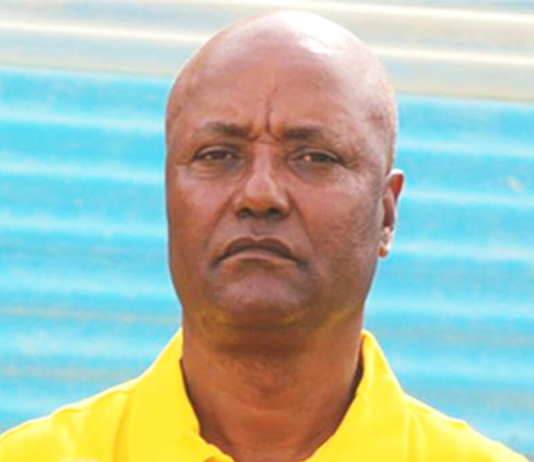 Five defeats in a row, former champion’s Jimma AbaJifar head coach Ashenafi Bekele appears to be the second Premier league Coach next to Addis Ababa’s Esmael Abubaker to get the boot from behind in the new season.
Despite signing more than two dozen players including veterans Dawit Estifanos and Mesoud Mohammed, Ashenafi is still searching for his first victory since the start of the new season.
Back to the premier league after a second chance from EFF, AbaJifar was expected to come up with a stronger squad under veteran Coach Ashenafi Bekele. But many who joined the club are either flat footed veterans or rookies with little experience at the top tier.
An error-prone shot stopper between the posts, sloppy defense line, a disorganized midfield and no designated striker, AbaJifar’s so far five fixtures ended in miserable results.
Same 1-0 defeat at the hands of Hawassa and Adama followed by 4-0 and 3-1 crushing at the hands of Fasil Ketema and Diredawa respectively and the 2-1 defeat against Ethiopia Bunna on Tuesday, AbaJifar is currently rock bottom of the table with no points and nine goals deficit.
The poor results made AbaJifar the hottest favorite for relegation despite it being early in the season to predict. The club supporters appeared to have no patience to tolerate Ashenafi thus calling for his resignation in the past two games.
Nevertheless Ashenafi seems to care little about the pressure from supporters as well from club officials. “I am not worried for that matter, I do not care much about the rumors flying around for my focus is about working hard on the progress of whatever young talents I have at hand,” Ashenafi told reporters.