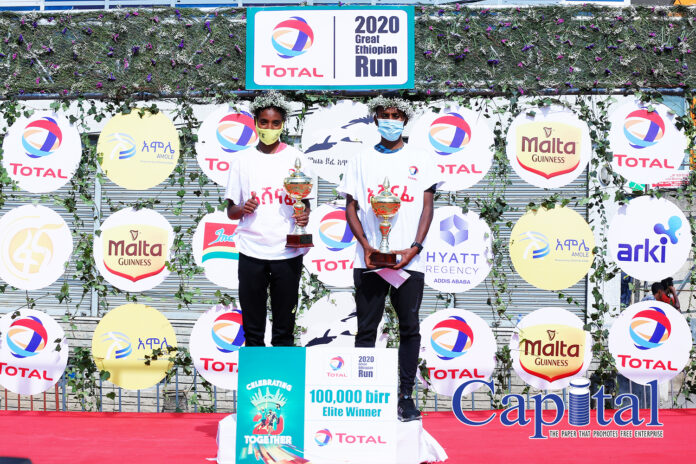 Abe Gashahun got within one second of the men’s course record to regain his title at the Great Ethiopian Run, while Tsigie Gebreselama finally triumphed in the women’s race in Addis Ababa on Sunday (10) after finishing third in 2018 and second in 2019.
Both races were close. Gashahun, who won the race back in 2016 as an unheralded teenager, was pushed most of the way by Milkesa Mengesha and Tadese Worku, the world U20 cross-country gold and silver medallists respectively. Mengesha’s challenge faded in the latter stages, while Worku stuck close to Gashahun but was unable to get past. Gashahun crossed the line in 28:20 to win by one second with Mengesha placing third in 28:40.
Gashahun’s winning time was just one second shy of the 28:19 course record set 15 years ago by Deriba Merga.
The women’s race was similarly close. Gebreselama, the world U20 cross-country bronze medallist, held off a fierce challenge from little-known Medihen Gebreselasie to win by two seconds in 32:33 – the fourth-fastest winning time at the Great Ethiopian Run.
Usually held in November, the 20th edition of the Great Ethiopian Run was moved from November 2020 to January 2021 due to the coronavirus pandemic. Organizers also significantly reduced the size of the mass field from 50,000 to 12,500 runners to comply with the Ethiopian government’s directives. ETHIOPIA: NO SHORTAGE OF QUEENS

COVID19 MAKING THE CASE FOR PUBLIC ART IN ADDIS ABEBA