Although the fixtures are likely to be postponed due to the outbreak of Corona Virus, Ethiopian national team boss Abraham Mebratu called in to camp a 24 players squad to kick-off preparation for African nations qualification group stage third round against Niger. Headlines are more dominated by news of the controversial selection than the double face-off against Niger on the 28th March with the home return leg three days later.
It took many by sheer surprise when Abraham’s sided leading premier league goal scorer Mujib Kasim in order to call Mikiyas Mekonen and Mesfin Tadesse. Add to that the selection of six players from 8th place Ethiopia Bunna while only one player each from leaders Fasil and Mekelle, Abraham appears more concerned about ill popularity than results to come.
“The selection is all about making happy the ferocious Ethiopia Bunna supporters and show off support to Kassaye’s unwritten theory” suggested a premier league coach. “Forgetting leading goal scorer Mujib Kasim and midfielder Fitsum Alemu and calling Mikiyas Makonen and Yehun Enedshaw from bottom of the table Hadiya is something bizarre” he added.
Including goalie T/Mariam Shanko six players (two defenders, two strikes and one midfielder) called from Bunna whereas one each from the league leaders makes the selection open for any speculation. Baherdar’s phenomenal midfielder with four goals in his name Fitsum Alemu, Fekreyesus T/ Berhan of Ethiopia Bunna and defender Wondemeneh Dreje are the notable absentees.
Never a footballer but Football Federation’s golden boy for his charm and soft spoken character, national Coach Abraham is under heavy pressure from Professional Footballers Association and media outlets. 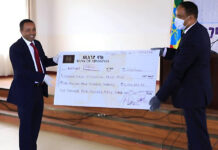