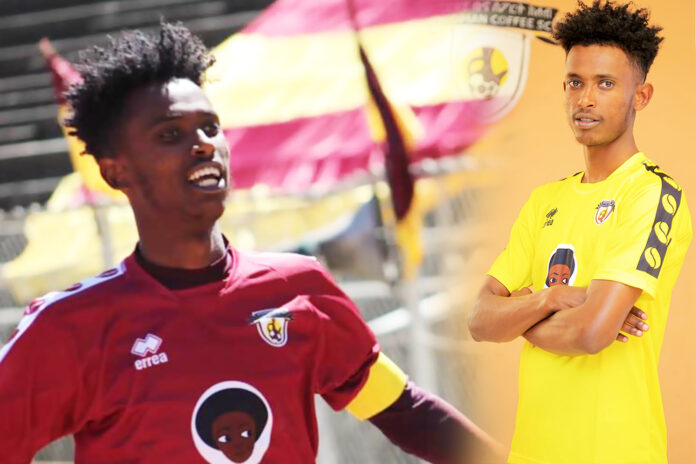 A great performance from hat trick hero Abubakar Nasser that go along a penalty miss set BetKing Ethiopian premier league new season biggest derby match between city rivals Ethiopia Bunna and St George which ended in a spectacular 3-2 victory to the Brown Shirts.
The win was not just a matter of three points, rather a huge moral boosting victory for popular Coach Kassaye Arage and the upcoming young talents that are under heavy pressure from club supporters. It was a heyday to goal hunter Abubakar who bagged a hat trick to take his goal tally to eight. “I don’t think the players are to feel easy from now onwards for the trophy hungry supporters are no more to listen to lame excuses after Tuesday’s huge victory,” suggested a former Bunna player.
A foreign Coach, three foreign players and five of the country’s best strikers in the squad, St George had had every fire power to return home with all three points. But amazing Bunna not only won the game 3-1 and missed from the penalty spot. But in full domination of the show once Matasi left the field with red card just 15 minutes into the game. South African Makeshift Coach Maahier Davids appeared to have short of any insight to save the day for The Horse Riders that still are title favorites despite losing two of their five matches. A strike force spearheads by leading scorer Getaneh Kebede and flanked by Abel Mulugeta and Gadisa Mebrate, Giorgis appeared fearsome against blunder prone Bunna defenders. Of course St George’s second equalizer was the result of silly defensive mistake.
While a draw appeared eminent, long rusted goalie Lealem Berhanu’s 90th minute blunder helped Abubakar to grab the winning goal. The hat trick hero Abubakar gave a historic Christmas gift to Ethiopia Bunna supporters that returned home dancing all over the street. “It is the most precious day of my life,” Abubakar remarked after the match.

We need to close the vaccination gap

“A friend in need is a friend indeed”