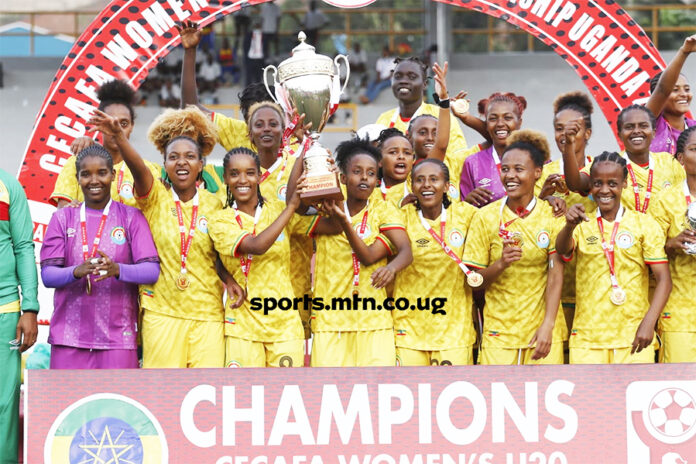 It is not only about bringing home the inaugural East African U-20 Women’s championship but an adventurous Cup final showdown with Ethiopia coming behind a first half two goals down to battle for an exciting 3-2 victory over hosts and title favorites Uganda. Add to that the red card for the goalkeeper just ten minutes into the game, winning the coveted championship title is nothing short of a miracle delivered by Coach Ferew HaileGebriel and his girls.
Both teams unbeaten all through the tournament, it was a much anticipated Cup final between hosts Uganda and Ethiopia. It was nearly turned to the expectations had it not been for the ten girls visitors revived from a first half two goals down to disappoint the hosts with a 3-2 miraculous score line victory to proudly take aloft the coveted championship trophy.
Goalie Eyerusalem’s red card just six minutes into the match then a 26th minute opened by Hadiijah Nandago followed by captain Fauzia Najjemba’s second at the final minutes of the break, no one expected the second half surprise comeback by the visitors.
Rideate Assresahne’s pulling one back six minutes after the break and the domination clear for all to see, substitute Ariet Odong’s equalizer at the 78th minute, the hosts lost their prior belief eventually surrendering everything there was for them after Tourist Lemma hammered in the final nail on the coffin eight minutes to the final whistle. It was a historic victory for Ethiopian Women’s football as well as a fruit of sheer hard work by Ethiopian girls.
Not only the inaugural trophy but the tournament’s Most Valuable Player award also handed to Ethiopian defender Denke Amare while Ugandan striker Fauzia Najjemba handed the Top scorer award for bagging eleven goals.
The victorious Ethiopian team reached Addis on Thursday for a red carpet welcoming reception followed by a welcoming party at Jupiter Hotel where a 1.8 million Birr prize money package handed for the team.