HomeSportsEight of the ten fastest men’s times in history are in the...
Sports 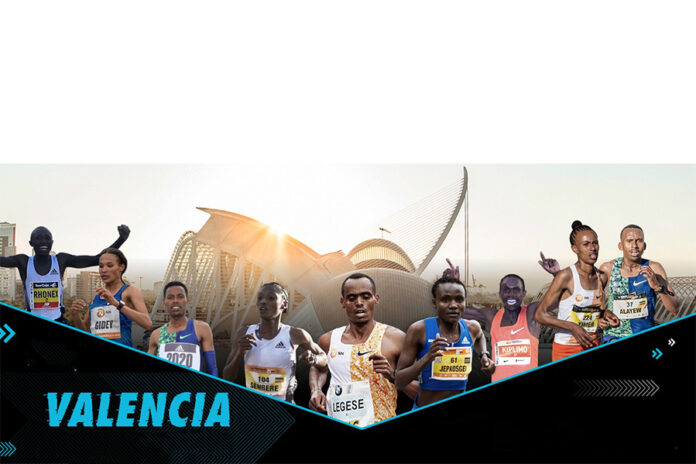 In the women’s category, three of the top 10 times, including first and second fastest, have been set in the city of running, with the two fastest times in history
The Valencia Half Marathon Trinidad Alfonso EDP has the privilege of being the only race that currently holds the men’s and women’s world record at its distance, but that is not all. The 21K organised by the SD Correcaminos holds eight of the 10 best half marathon times in history for men and three in the women’s ranking.
Kibiwott Kandie’s time in the 2020 Elite Edition remains the world record with his unbeaten 57:32. After him, second, third and fourth place go to Jacob Kiplimo (57:37), Rhonex Kipruto (57:49) and Alexander Mutiso (57:59), all achieved in Valencia City of Running in 2020.
In sixth and seventh place are Abel Kipchumba (58:07) and Rhonex Kipruto (58:09), respectively, in eighth place is Philemon Kiplimo (58:11) in the Elite Edition and Daniel Mateiko with his 58:26 on Sunday closes the ranking.
Abel Kipchumba’s time was also the world best time for 2021, bettering the record he himself had held since September in Herzogenaurach, Germany (58:48). In fact, the top seven in Valencia last Sunday improved on that record.
Much more than a women’s world record
In the women’s category, Valencia takes the first two places on the podium thanks to Letesenbet Gidey’s world record in the 30th Valencia Half Marathon and Yalemzerf Yehualaw’s 1:02:52 – who also beat the previous world record – with 1:03:51. In addition, in eighth place we find Joyciline Jepkosgei who set the world record in this race in 2017 with 1:04:51.
Moreover, the combined time of the male and female winner is the best ever obtained in the same race, 2h00:59 (58:07 + 1:02:52), beating the combined time of the 2020 Elite Edition (2h02:50).