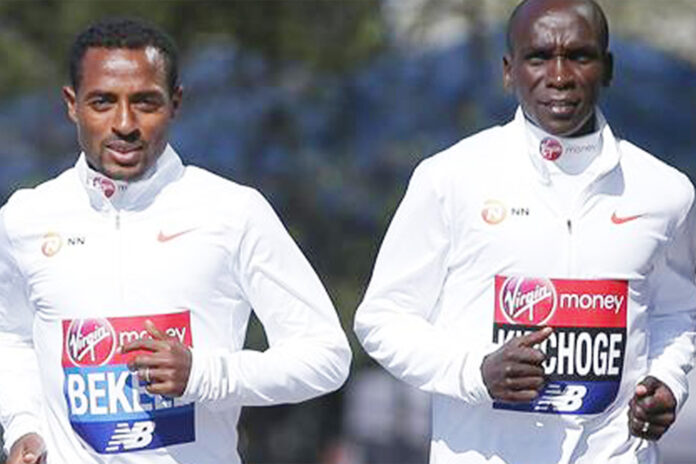 Runners from around the world will have the chance to team up with the likes of marathon superstar Eliud Kipchoge next month as the NN Running Team has announced a worldwide virtual team relay event involving some of its top athletes.
While traditional races have been cancelled and postponed due to the coronavirus crisis, virtual events are experiencing a boom. Now the NN Running Team has launched ‘MA RA TH ON’ to take place on June 6 and 7, giving participants the opportunity to run against, or even possibly with, athletes such as Kipchoge, Kenenisa Bekele, Joshua Cheptegei and Geoffrey Kamworor to complete a marathon.
The event involves each runner in the four-strong teams completing 10.5km. Runners can enter as complete teams of four, or if entering solo they will be teamed up with runners from around the world. The NN Running Team athletes will be randomly added to 10 of the participating teams.
“I can say that myself and my teammates are really looking forward to join the relay in this wonderful initiative,” said world marathon record-holder Kipchoge.
“It has been an unusual time whereby all runners had to readjust their plans after having prepared well towards their own goals for this past spring season. We all look forward to a positive future and I believe that this a great first step in that direction.
“Marathon is a sport whereby elite athletes and fun runners are actually all racing in the same race. It’s what makes our sport unique and I find the essence of this to be beautiful. Every runner has their own pace, their own background and their own motives to why they run.