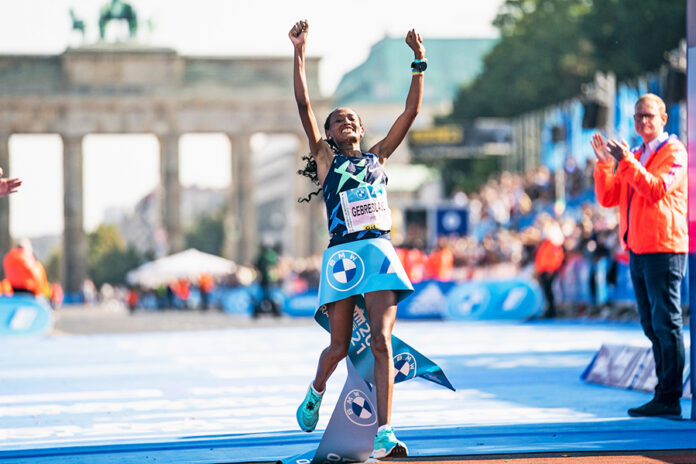 Ethiopia’s Gotytom Gebreslase and Kenya’s Philemon Kiplimo claimed victory at the Bahrain Royal International Night Half Marathon – a World Athletics Label road race – when the event returned for its second edition.
After running 2:20:09 to triumph when making her marathon debut in Berlin in September, Gotytom achieved another impressive result as she improved her half marathon PB to 1:05:36 in Manama to win by 11 seconds ahead of home favorite Kalkidan Gezahegne – the Olympic 10,000m silver medalist who was making her half marathon debut after breaking the world 10km record with 29:38 in Geneva in October.
The women’s race had got off to a blistering start, with Gotytom and Kalkidan both part of a group which passed the 5km mark in 14:53, well inside world record pace. The race also featured Kenya’s former world record-holder Ruth Chepngetich, who had run 1:04:02 in Istanbul in April and won October’s Chicago Marathon in 2:22:31, but she ran to around 17km in Manama and did not finish.
Gotytom had increased her lead to 11 seconds by the finish, with the top two clear ahead of the rest of the field. Sheila Kiprotich secured third place in 1:07:01 and was followed by her Kenyan compatriots Irene Cheptai, who was four seconds back.