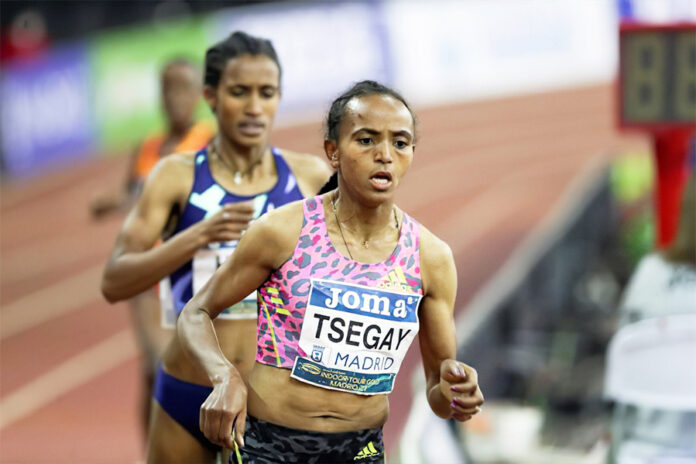 Ethiopia’s Gudaf Tsegay ran an amazing 29:39.42 10000meter debut at the Fernanda Reberio Gold Gala in Portugal. The World Indoor 1500 meter record holder (3:53.09), ran 14;55 for the first 5000 meter and then accelerated to 14:49 for the second half to win the race in 29:39.42.
Behind Gudaf finished Ethiopian-Bahrain’s Kalkidan Gezahne who returned to racing in 2018 and amazingly clocked 29:50.77. Meanwhile, Uganda’s Doreen Chesang took third place in 30:09.82.
The 24 year-old Gudaf became the first woman in history who in her 10000meter debut broke the 30 minute barrier , Gudaf’s 29:39.42 puts her in fifth place on the world all-time list.
Breaking the women’s world record for the indoor 1500 meters in February 2021 after posting a time of three minutes, 53.09 seconds and now a phenomenal finish in her debut 10000m race Gudaf is one of the highly expected prospects of Ethiopian athletes at Tokyo Olympics.