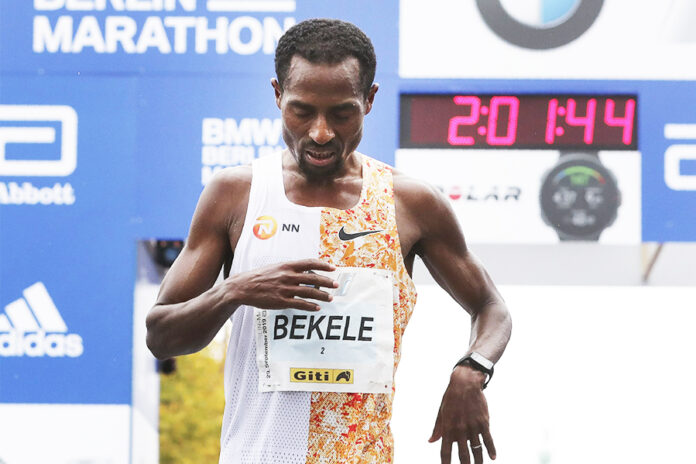 Plans for the Ethiopian Athletics Federation to hold its Olympic marathon trials in Geneva, Switzerland, this weekend have been scrapped. The race, which had originally been scheduled for Sunday, May 2, will now be held on Saturday, May 1, in Sebeta, Ethiopia which sits at 7,730 feet of elevation roughly 15 miles southwest of the Ethiopian capital of Addis Ababa. The format will remain the same, with the top three finishers earning spots on the Ethiopian team for the Olympic marathon in Sapporo this summer, though the distance will be 35 kilometers (21.7 miles) as opposed to a full marathon.
Haji Adilo, coach of the Ethiopian Olympic marathon team, told LetsRun the trials were moved from Geneva due to COVID concerns. Many top Ethiopian athletes have been based in hotels in Addis Ababa since January and Adilo said there was concern that traveling to Switzerland could result in a positive test ruling an athlete out of the trials at the last minute.
Despite moving the trials to Ethiopia making the race more accessible to the country’s aspiring Olympians Adilo said the races will remain small. Adilo said the women’s race will consist of just six athletes: Roza Dereje, Birhane Dibaba, Degitu Azimeraw, Zeineba Yimer, Tigist Girma, and Ashete Bekere.
The men’s race will be slightly larger, in part due to injury concerns surrounding three of Ethiopia’s biggest stars: Kenenisa Bekele (three-time Olympic gold medalist, second-fastest marathon ever), Birhanu Legese (two-time Tokyo champ, 2:02:48 pb), and Mosinet Geremew (World Championship silver medalist, 2:02:55 pb). It’s possible all three of them don’t run the race and with only three other athletes (Sisay Lemma, Lelisa Desisa, and Shura Kitata) in the field, it would have made little sense to hold a three-person trials if Bekele, Legese, and Geremew end up withdrawing. So the field has expanded, with Adilo saying Mule Wasihun (2:03:16 pb), Getaneh Molla (2:03:34 pb, 2019 Dubai champ), and Kinde Atanaw (2:03:51 pb, 2019 Valencia champ) also expected to compete.