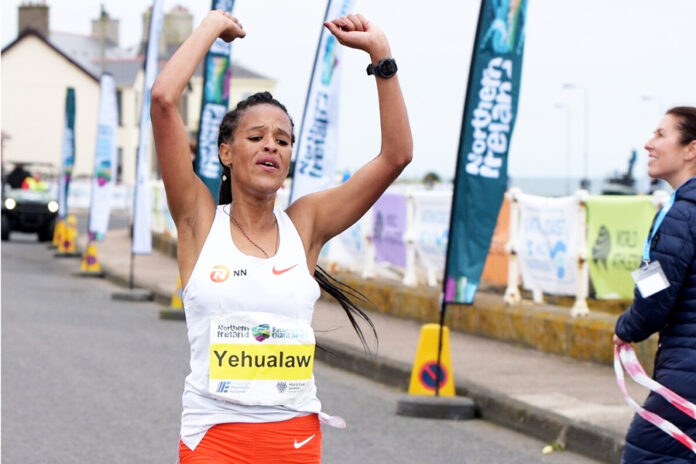 Ethiopia’s Yalemzerf Yehualaw made history in Hamburg running 2:17:23 for the fastest ever women’s marathon debut.
The 22-year-old won the Haspa Marathon Hamburg by almost nine minutes, breaking the Ethiopian record and German all-comers’ record, while just a second separated the top two in the men’s race. Kenya’s Cybrian Kotut clocked 2:04:47 to pip Uganda’s Stephen Kissa as the top four were all under the previous men’s course record of 2:05:30 set by Eliud Kipchoge in 2013.
Having broken the world 10km record with 29:14 in Castellon in February and with a half marathon best of 1:03:51 to her name, Yehualaw’s marathon debut was highly anticipated and she delivered in fine style.
Fast from the start, she ran with her male pacemakers through 10km in 32:39 and was on exactly 2:17 marathon pace through half way (1:08:30). Slowing only marginally in the second half, she went through 30km in 1:37:34 before running solo through 35km in 1:53:55 once her pacemakers had done their job.
The world half marathon bronze medallist continued on to eventually reach the finish line with 2:17:23 on the clock, well under the previous fastest ever women’s marathon debut time of 2:18:56 achieved by Paula Radcliffe in 2002.
The performance puts Yehualaw sixth on the women’s world marathon all-time list, topped by Brigid Kosgei’s world record of 2:14:04 set in 2019, and is the third-fastest time of the year so far.
She led an Ethiopian top three, with Fikrte Wereta and Bone Cheluke clocking respective times of 2:26:15 and 2:26:23, also on their marathon debuts.
“The race went well for me, considering this was my first marathon,” said Yehualaw. “The fast Hamburg course suited me and the spectators helped me a lot.”