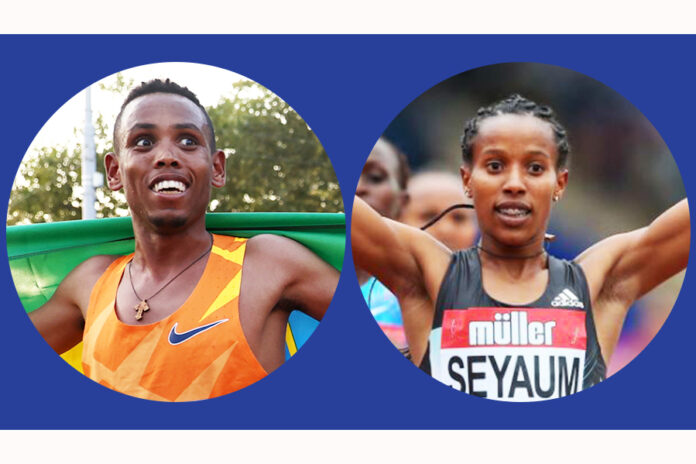 Ethiopian athletes had been busy over the weekend setting new record and winning titles at European major cities. Dawit Seyoum and Berihu Aregawi won Women’s and Men’s 5KM race respectively in Lille-France while Zenebu Fikadu claimed San Sebastian World Athletics cross country Tour followed by compatriot Zerfe Wondemagne. Little known Chemdesa took everyone by surprise winning the 10KM race.
Ethiopia’s Dawit Seyaum took two seconds off the world record* for 5km in a mixed race, winning at the Urban Trail Lille event on Saturday (6) with 14:39. Dawit’s winning performance comes just two months after another Ethiopian Senbre Teferi , set a women-only world record of 14:29 for the distance at Herzogenaurach.
In the men’s race, Diamond League 5000m champion Berihu Aregawi of Ethiopia came within one second of Joshua Cheptegei’s world record, winning by more than half a minute in 12:52.
There was further Ethiopian success in the men’s 10km as the relatively unheralded Chimdesa Debele Gudeta won in 27:14 from Kenya’s Kenneth Kiprop (27:23). Steeplechase specialist Celliphine Chespol won the women’s 10km in 30:19 from fellow Kenyan Daisy Cherotich (30:31).
The 22-year-old was making her come back to competition in San Sebastian after almost two years, when she won the Venta de Banos cross country permit in December 2019. The other marquee athlete was her compatriot Zerfe, who finished eighth at the Tokyo Olympics in the 3000m steeplechase in a lifetime best of 9:16.41.
Though Spanish duo Carolina and Rodriguez took charge from the gun,it was an all Ethiopian show past the second round. At the bell, the 2019 winner, injected a brisker speed to leave the 19-year-old Zerfe clearly behind. to cross the line in 25:27. Zenebu crossed the finishing line in 25:27 with Zerfe a runner-up a second later.