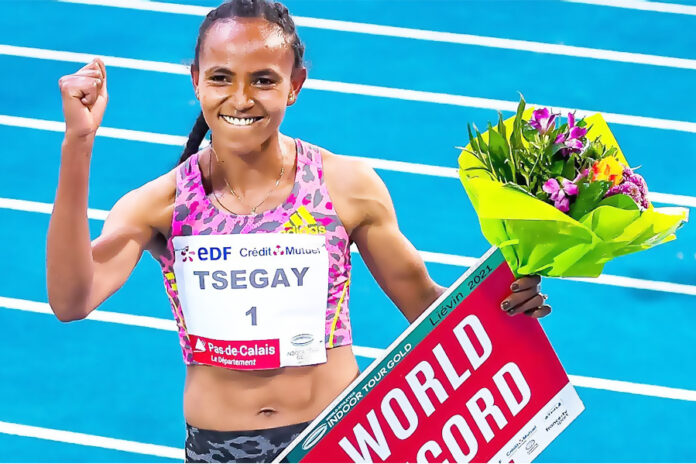 Gudaf Tsegay opted to race over 15 laps of the track and produced the third-fastest 3000m time indoors when she crossed the line in 8:22.65, making her the second-fastest indoor performer in history.
Gudaf’s training partner Lemlem Hailu who stayed second over the entire race finished runner up. The two compatriots worked hard to smash Genzebe Dibaba’s world indoor record of 8:16.60 in 2014 but missed the chance slowing at a final couple of laps.
In the men’s 1500m, Ethiopian Selemon Barega was in front of the gun and turned the race into a time trial before crossing the line in an impressive 3:35.42 to clinch the tour first prize. Barega’s super performance heralded that he is ready to fly the Ethiopian flag in the coming Tokyo Olympics.
The non-scoring women’s 1500m produced a surprise winner in the shape of Another Ethiopian 20-year-old Hirut Meshesha took everyone by surprise winning her first serious international 1500m race in front of several better-known runners in 4:09.42.
In the women’s 800m, Habitam Alemu got the first of the day’s four Ethiopian victories. Habtam knew that she had already clinched the top slot in the tour standings but was not content to rest on her laurels and started to move away from her nearest rival Nadia Power midway through the third lap. Habtam crossed the finishing line in a meeting record of 1:58.95, less than one second away from her tour record of 1:58.19 set in Torun last week.