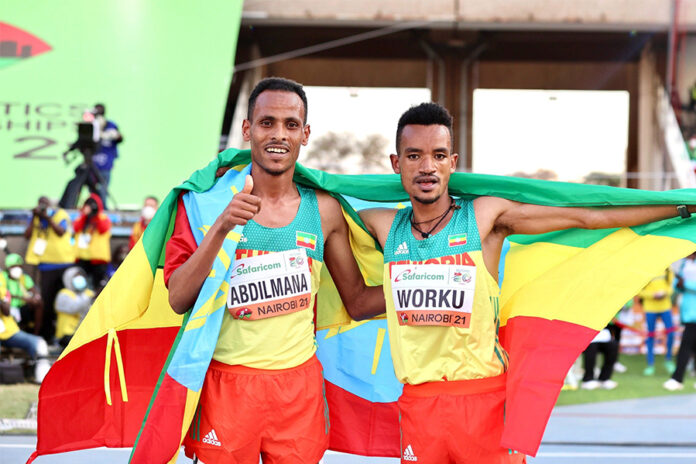 The Ethiopian duo of Tadese Worku and Ali Abdilmana completely annihilated the field, taking the top two podium spots in the men’s 3,000m final on the opening day of the World Athletics Under-20 Championships at the Moi Sports Centre Kasarani on Wednesday evening.
Worku topped for gold with Abdilmana coming home for silver as Eritrea’s Hebtom Samuel settled for bronze. Kenya’s hope for a maiden medal at the Championships went up in smoke with the two representatives, Daniel Kinyanjui and Bernard Kibet finishing seventh and ninth respectively.
Worku who was the highest profile in the field won the race in a time of 7mins, 42.09secs which stood as the Championship record as this was the first time the event was being staged in the Under-20 level.
Compatriot Abdilmana clocked a new personal best time of 7mins, 44.55secs for silver while Samuel won Eritrea’s first medal at the event, also with a new Personal best time of 7mins, 52.69secs.
Worku who also won silver at the last world cross country championship in the Under-20 category showed he was a man on a mission from the first lap, taking command of the race as Abdilmana slowy trailed behind.
The Kenyans had been tucked in the middle of the pack for the first four laps but with three to go, they began waning off. Worku stepped up a bit on the gas pedals and the pace looked too much for the Kenyans.
Kibet, who had been trailing the leading pack, began falling off and so did Kinyanjui. Samuel and fellow Eritrean Merhawi Mehbratu were running on the necks of the Kenyans and when the two faded off, they took up the mantle to chase for bronze.
Worku and Abdilmana had already opened a 20m gap by the time the bell was sounding with Worku having the stronger kick to go on and win the race.
Meanwhile in other medal events, South African Mire Reinstorfnwon pole vault gold after clearing the highest distance at 4.15m on her first attempt. She finished ahead of France’s Elisse Russis who also cleared 4.15m but only on her second attempt while Canadian Heather Abadie was third in bronze medal position with a high of 4.05m.