Despite turbulent seasons while in the hot seat of Defense Force (Mekelakya) and Ethiopia NegedBank, he happened to be the architect of the hard to beat Dedebit breaking the long standing rivalry of two horses Kidus Giorgis and Ethiopia Bunna.

Passionate and sometimes spitting fire while under pressure the heavy set yet a man of detail Negussie had been in his second spell with The Blues that started the 2018 season in style leading the league table until the final two matches of the first round when he got suspended for manhandling the referee. Had it not been for that suspension, Negusse’s hard work of forging strong comradery along with big name players the likes of Getaneh Kebede, Seyoum Tesfaye, Aynalem Hailu and Asrat Megersa, Dedebit could have made Dedebit once again Ethiopian Champion. “It was not the football but his capacity as a strong motivator makes him different than any other coaches that graced the team” a player in the current squad remarked.

He returned to action a month before the incident and was focused on inspiring Dedebit to revive in to the second round. Negusse’s passed away just exactly a year from former Ethiopia Bunna and National team striker Asseged Tesfaye’s sudden death due to heart failure.

Civil Society Commission to be overseen by Executive Branch 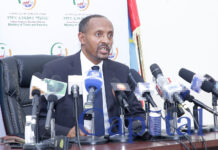