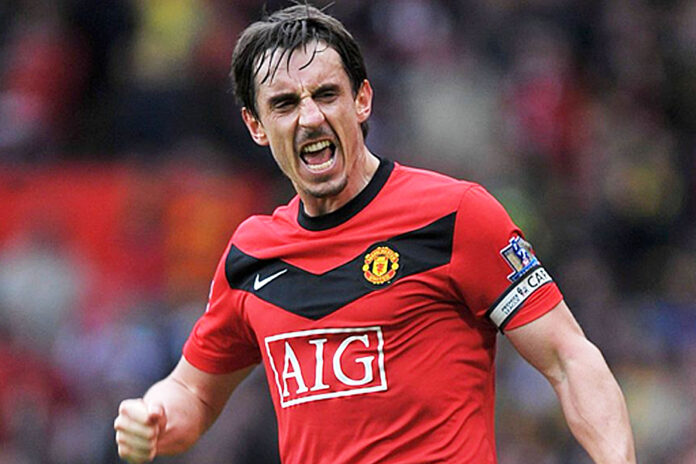 Gary Neville is one of those unique players who throughout his football career defended one and the same club’s colors. Nowadays, he can no longer be found in the livescore of Manchester United games, but over the past years he was an indispensable part of the starting squad. For the first time the young defender appeared wearing a Red Devils’ T-shirt in 1991, remaining at the club for as long as twenty years. Over this time, he played more than 600 games, getting several Premier League titles, three FA Cups, two Champions League cups, and so on. At the same time, Neville was regularly invited to the national team England.

Modern fans may be surprised, but MU became a regular participant of the Champions League at the end of the 20th century only. Now, you can follow your favorite team’s livescore almost from anywhere on the globe. Nevertheless, without a powerful defense built around Gary, his club wouldn’t have been able to win the golden hat-trick, winning all the possible trophies in 1998-1999 season. Next time he would be able to win the Champions League in 9 years only, when he wasn’t just a part of Manchester United’s main squad, but its full-fledged captain.

As his partners and opponents characterized him, he is the best right-back of his generation, who feels the game and is always in the right place at the right time. Indeed, Premier League fixtures today are held with participation of high-class football players, but Neville is a true legend who would find his place in MU even now. According to experts and the player himself, there have been a few really important moments in his career that really touched his soul:

Indeed, all this is about Gary’s career as a player only. His successes as the head coach of the English national team stand apart, but this is a topic for another article.