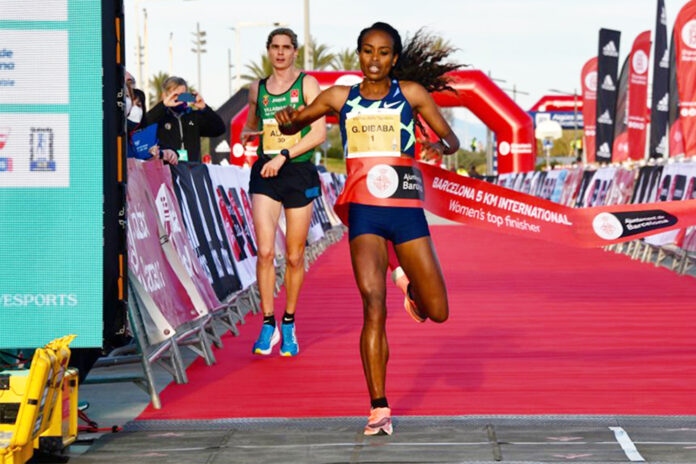 Seven time world record holder Ethiopian great Genzebe Dibaba and Frenchman Jimmy Gressier won the 5km road at the 2020 Cursa dels Nassos road race in Barcelona, Spain on Thursday, 31st December, 2020.
Dibaba attempted the women’s 5km World record of 14:48 while Gressier tried to beat his own European record of 13:18. Neither one of them was able to break records today.
Dibaba who was paced by a pack of 5 men won the women’s 5k in a Wolrd leading time of 15:00. Her younger sister Anna Dibaba was miles behind in second in 16:02 with Spanish 800m runner Esther Guerrero Puigdevall in third in 16:03.
In the men’s 5km race, Greasier in a thrilling sprint finish defeated Santiago Catrofe. Greasier’s winning time was 13:39 while Catrofe clocked 13:40 for 2nd. Yann Schurb concluded the podium with 13:45.
Just 30 minutes later Greasier lined up for the 10km and finished third in 28:13. The men’s 10km race was won by Mohamned Amdouni in 27:42 with Carlos Mayo Nieto in 2nd in 28:06.
In the women’s 10km race, Hellen Obiri, the reigning World champion over 5000m and cross country attempted the World record, but all her plans vanished just 2 minutes into the race after she suffered a heavy fall in one of the turns. Despite the terrifying crash, Obiri was able to stand up and continue to win the race in a very solid time of 30:53.

Abiy’s “Horrendous Misjudgement”: TPLF’s History of “Fight from the Hills”