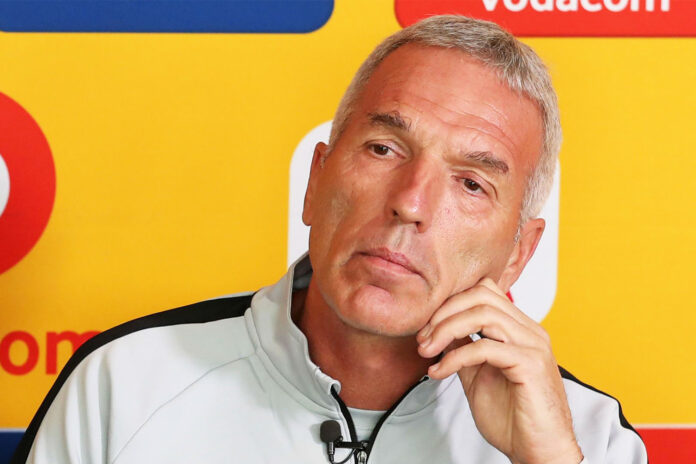 Notorious for wandering around different clubs that is 23 teams in three decades, German Coach Ernest Middendrop did what he did best with other side that is abandoning St George in less than a months’ time. He left the club flat footed just four weeks in to his three years contract. Physical trainer Mahir Davids takes over at the vacant hot seat as interim Coach.
Just three weeks at the club’s preseason camp at Yedenekachew Tessema Acadamy: forty-five kms from the capital, Middendrop took the players as well the club officials announcing his sudden change of mind on grounds of security.
Though Board Chairman Abnet G/Meskel boasted they have finally found the right boss to steer back his side to former glory day, the German simply walked out of his three years contract without much explanation.
Although he paid a two months’ salary for the contract breach, St George is suspended in the air five weeks from the start of the new season.
Of course the South African Mahir Davids who joined the team as assistant to Middendorp took over as interim Coach until a new appointment. Nevertheless the team’s dream of returning to the championship after three disappointing seasons appeared to face a difficult setback. What is more bizarre is that of the Germans decision to let the players have a seven days break just three weeks into their preseason preparation camp at the club youth academy at Debrezeit 45km from the Capital.
Despite the club’s claim that they parted sides after mutual agreement to pay his two month salary as penalty for breaching the contract, insiders disclosed he was unhappy with the club’s setup including players’ selection and interference of the administration.
Having a long history of switching clubs and his loyalty in question, critics suggested earlier that the 61 year-old German was not the right professional to help St George back to the championship title. “Middendorp’s record shows he is not someone to be trusted for lasting commitment. I wonder why they signed him after all,” one critic remarked.
St George is the only club in the country to appoint a foreign Coach for the new season.