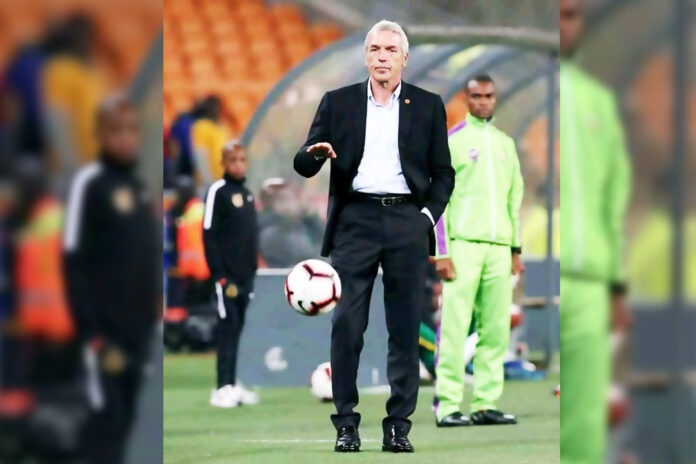 Record 14 times Ethiopian Premier League champion St George once again turned out the only side to employ a foreign Coach handing a three years contract to German Ernest Middendorp. According to the club’s Board member and marketing Head Dawit Wubeshet propelling the team back in to championship title, overseeing the Youth scheme and steer St George to Confederation Cup last eight are few of the responsibilities bestowed to Middendorp.
Ten years as a player with 198 goals in 235 appearances, the economics graduate Ernest Johannes Middendorp turned out Coach since 1985 and travelled to more than two dozen clubs in nearly four decades. Though championship titles and trophies are not mentioned in his profile, his travel took him to Asia and Africa where he managed the likes of big time clubs Hearts of Oak and Ashante Kotoko of Ghana.
Quitting his second spell with South African giants Kaizer Chiefs just days before putting his signature to St George , the 61 year Coach is expected to arrive to Addis Ababa to his first ever encounter with the team that had been laid off for the past seven months due to Covid19 Epidemic.
In addition to building the side almost from a scratch and steer them to back to the glory day, Middendorp has additional duties involving in the overall structure of the 80-plus years St George that never has its own stadium and dependant of one of Ethiopia’s leading investor Abnet G/Meskel.
Twenty three teams in 35 years with an average of 1.7 years in a single club, it appears that Middendorp has little patience or no long term plan to commit himself to one club.
According to FarPost publication, Middendorp had also been linked for the Head Coach position with Tanzanian giant Yanga and Ajax Cape town thus his arrival to Addis Ababa is not yet confirmed.