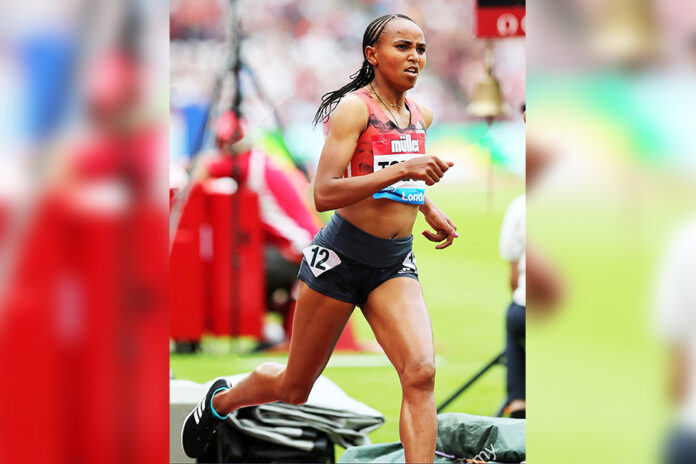 The athletics meeting at Hauts-de-France Pas-de-Calais had been billed as the stand-out event of the season so far and it will go down as one of the best in history, with a series of storming performances in Liévin capped by Ethiopian middle distance star Gudaf Tsegay who set world Indoor 1500m new record of 3:53.09.
By the time world bronze medalist Tsegay took to the track, there had already been a near world indoor 3000m record by Getnet Wale and a European indoor 1500m record by Jakob Ingebrigtsen, while Laura Muir’s time in second behind Gudaf broke the British indoor record and Grant Holloway rounded out the evening by missing the world 60m hurdles record by just 0.02.
In the women’s 1500m, Ethiopia’s Gudaf took more than two seconds off the world indoor record set by compatriot Genzebe Dibaba in 2014, managing to hold on after being paced through some fast early laps.
Following the pacemaker through 400m in 58.97 and then passing 800m in 2:05.94, the 1.63 meter light weight had already created a significant gap on the rest of the field. She went through 1000m in 2:37.36, with European champion Muir who was running solo behind her.
Gritting her teeth, the 24 year-old former bronze medalist Gudaf Tsegay stormed over the finish line with the clock reading 3:53.09 before she erupted into celebrations.