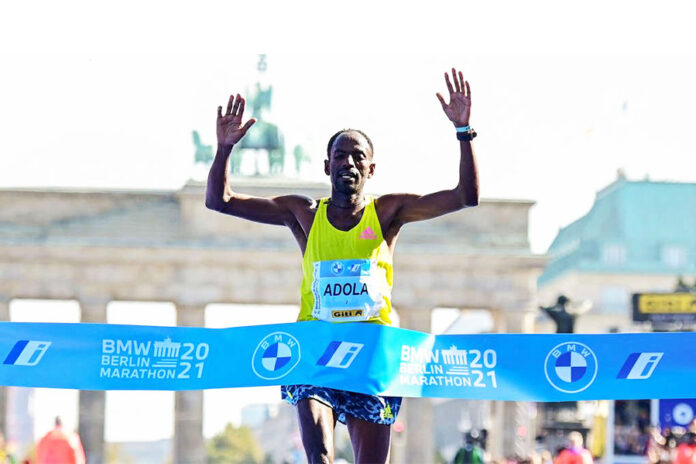 Ethiopian Guye Adola and his compatriot Goyttom G/Selase dominated Men’s and Women’s Berlin Marathon to win double gold medals while long distance legend Kenenisa Bekele who struggled with a Covid-19 infection nine months ago finished third.
In an Ethiopian treble, Goyttom Gebreslase won the women’s race in her debut marathon in 2hr 20min 9sec, leaving Hiwot Gebrekidan in second place and Helen Tola in third.
Though there was no world record this time at the flat inner-city course but there was enough suspense and excitement before Guye crossed the finish line in an official time of 2:05:45 for the biggest win of his career.
Guye, who was second in Berlin in 2017, was made to work very hard from the start as part of the leading group of runners who set off at a dizzying pace with Bekele, a multiple Olympic and world champion over 5,000m and 10,000m, in the lead.
The 39-year-old Bekele, who was two seconds off the world record in 2019 in Berlin for the second fastest-ever marathon run, was still on world-record pace after 15km before dropping some 100m behind.
The high speed and warm temperatures gradually took their toll as the pace dropped considerably, and Bekele managed to claw his way back into the leaders’ group.
After 35KM Guye pulled away to cruise to victory, leaving Kenyan Yegon in second place and Bekele coming third.
After the race, Bekele said he plans not only to break the men’s marathon world record, but also to emulate Eliud Kipchoge by covering the distance in under two hours.
“My plan is not only to break the world record before I retire. Everybody is talking about sub-two hours, so why not?,” said Bekele, 39.