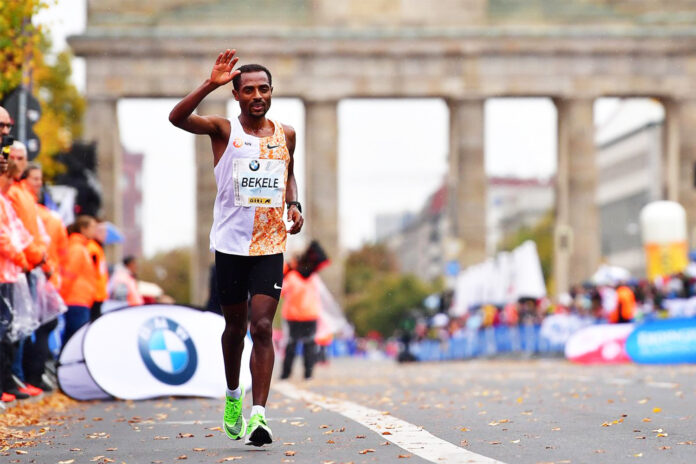 Ethiopia’s three-time Olympic and five-time world champion Kenenisa Bekele is one of the African continent’s finest athletes but he still wants to seal his golden legacy by becoming the fastest marathon runner of all time. The much anticipated race takes place in St James Park on October 4th.
He holds world records in the 5,000 and 10,000 meters and came within a whisker of posting another one last September at the Berlin marathon in one of the sport’s greatest comebacks.
In a gutsy race, Bekele came from behind to win but fell two seconds short of his rival Kenyan Eliud Kipchoge’s world record of two hours, one minute and 39 seconds.
“I still can do this (world record). I don’t give up. It is encouraging for the future,” Bekele said at the time.
The mouth-watering prospect of another crack at the world mark could have come last April at the London marathon, where he would have competed against Kipchoge.
However, that race fell victim to the novel coronavirus pandemic and has been rescheduled to Oct. 4. It is far from certain if it will take place, in what form and whether the two superstars will be on the start line if it does.
The 38-year old Bekele is one of the most dominant distance runners in the sport. He boasts three Olympic and five world championship golds over 10,000 and 5,000 meters not to mention a stunning 11 cross-country world championship golds.
His switch to road races in 2014 began with a bang as he won in Paris on his marathon debut, breaking the course record.
But he was then hit by injuries and it seemed like his best days were over before his marathon success in Berlin last year.
The second of six children, Bekele was born in Bekoji, in the central Ethiopian province of Arsi Province, a part of the country famous for producing great runners.
However, his life has not been without tragedy.
In 2005, while running with his 18-year-old fiancée Alem Techale on the outskirts of Ethiopia’s capital Addis Ababa, she fell ill and died soon after. “It’s a loss that will always stay with me,” Bekele told Reuters that year.
Two years later, he married Ethiopian actress Danawit Gebregziabher and they have three children.
While the coronavirus pandemic blocked the race that may have settled the debate over who is the best between him and Kipchoge, fans still hope to discover who will come out on top.
Bekele believes he can beat his great rival.
“He (Kipchoge) is human. If someone is well prepared and strong enough, why not? It’s a race,” he told the Olympic channel.