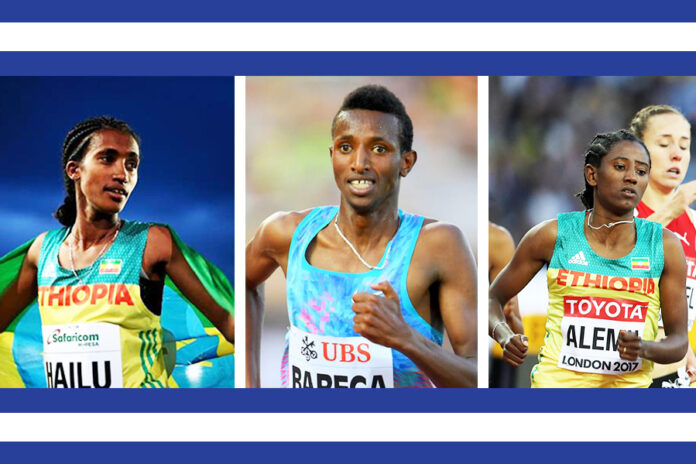 Ethiopian Lemlem whose World U-20 1500m record of 4:01.57 was ratified last week kicked to victory ahead of the race as a favorite whilst World 3000m record holder Kenyan Beatrice Chepkoech also produced a good show in the latest World Athletics Indoor Tour Gold event in Torun-Poland.
Lemlem, Chepkoech and Ethiopia’s Fantu Worku had followed the pacemaker through 1000m mark on a world record pace, clocking 2:44.60, but 200m earlier the world record-holder, Genzebe Dibaba, had dropped out of the race on her season debut.
The pace slowed to 3:01.25 for the second kilometer as Lemlem led from Chepkoech and Fantu with 5:45.85 on the clock. A quicker final kilometer saw the 2016 U-20 World champion silver medalist Fantu dropped and a last lap of around 28.8 saw 19-year-old Lemlem surge to a world-leading meeting record of 8:31.24 ahead of Chepkoech’s 8:31.72 PB.
Ethiopia’s world 5000m silver medalist Solomon Barega won the 1500m in an indoor PB and meeting record of 3:32.97 from Marcin Lewandowski with a Polish indoor record of 3:35.71. In third, Neil Gourley ran 3:35.79 to move to fifth on the UK indoor all-time rankings, whereas the time also beat his outdoor PB.
The Torun World Athletics Indoor Tour also offered another surprise victory to Ethiopia’s Habitam Alemu who ran a big PB to improve Women’s 800m’s previous meeting best with 1:58.19. It is the biggest accolade for the 24 year old Habtam who specializes in 800m event. Poland’s Joanna Jóźwik was second with 2:00.42, while Nadia Power had another fine run to smash her Irish indoor record with 2:00.98 in third.