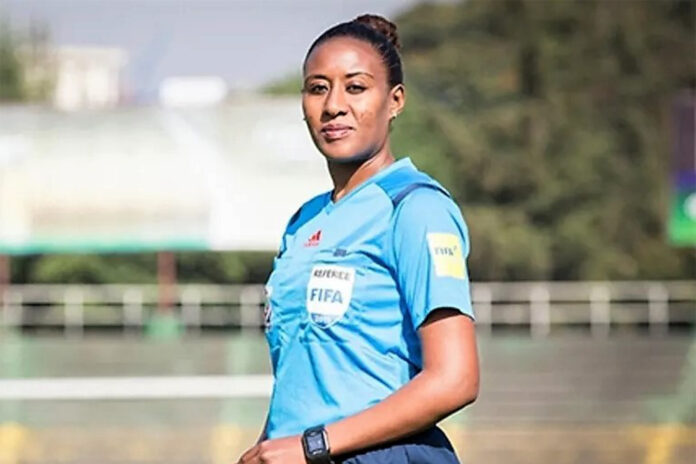 Starting off as a professional basketball player, not many thought Lidya Tafesse Abebe would trade the rims and bounces for the whistle, and not in basketball, but football. The 40-year old has been on a 20 -year journey of refereeing, becoming the first ever woman to officiate a men’s top flight game in Ethiopia.
She was also the first ever woman FIFA centre referee in the East African nation.
“I started off in Jimma while still playing basketball. I played football in school but basketball was my first sport. I was interested when I met one of the instructors doing some courses and some of us from the basketball team were invited. I liked how he was teaching and I got interested more,” Tafesse says.
The seed planted in her soul by the FIFA/CAF instructor Shiferaw Eshetu continued to germinate and grow as the days went on.
When she moved to the capital Addis Ababa to continue her basketball career and pursue a course in Pharmacy, the interest continued and soon, she started building on with more courses and when it became apparent that she had found some new love, dumped the old one; basketball.
“I was part of the female referees project and I started off by doing the Under-15, 17 games, the local tournaments as well as some Federation tournaments. I got more certification and I started doing the Men’s Premier League as an assistant referee and in 2005, I became a centre referee,” narrates Tafesse.
The journey, though satisfying hasn’t been easy for the mother of one. When she started, there were no women referees and when she officiated men’s games, there was even more difficulty.
But her resilience and desire to make a mark in Ethiopian football drover her passion.
“It was very difficult when I started because sometimes, some people would ask why I decided to go into refereeing as a woman when there were no any other women doing the same. But my family supported me and I am grateful for them,”
“Also, I came from a sports background and the fact that while playing basketball we trained and played against some men teams gave me confidence and it wasn’t so difficult for me at times, even when I did men’s games,” explains Tafesse.
(FIFA)