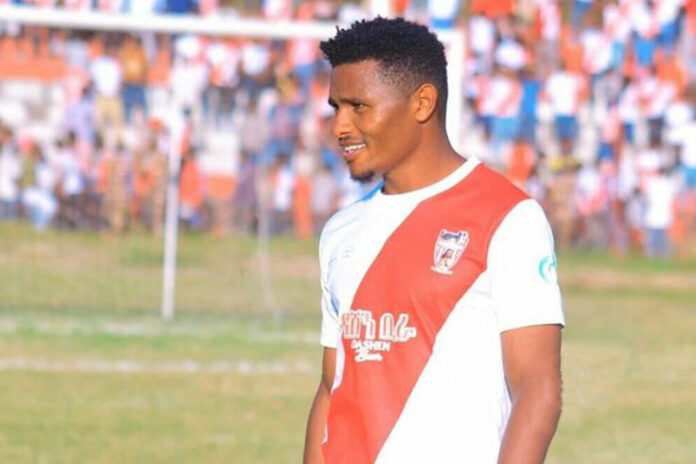 With such a fast and furious pace Fasil Ketema’s goal machine Mujib Kasim is sure to write a new chapter in football history book at the end of the season surpassing the 25 goals record set by St George striker Getaneh Kebede. Addis Gedey of Sidama Bunna and Biruk Beyene of Hawassa are joint seconds from afar.
Almost a goal per game Mujib managed to net more than half of the club’s 25 goals tally at the end of the ongoing league season first round. A hat trick over Diredawa Ketema, Mujib’s marksmanship helped Fasil to stay strong in the title race finishing second in the table with 26 points from 15 matches. Bagging 14 goals Mujib stands far ahead of his contenders.
Though Sidama Bunna revived late in to the end of the first round, one man strike force Addis Gidey appeared to get some rust. His contribution so far in the season is minimal that is nine out of the 28 goal tally thus sharing second place with Hawassa’s Biruk Beyene stands joint second scoring nine of the eighteen goal the club scored.
Fitsum Alemu of Baherdar and Baye Gezahne from Wolayta Dicha stand joint third each scoring eight goals. The upcoming game changer Abel Yalew of St George has scored seven goals while five players: Amanuel G/Kidan of Mekele, Fitsum G/Mariam of Sebeta, Getaneh kebede, Okiki Afolabi of Mekele and Yigezu Bogale of Sidama are next in the rank each banging in six goals.