More than two decades orchestrating the mid field play, Mulualem Regassa is still going strong in Ethiopian Premier League football signing a new contract deal with newly promoted side Debu Police. Late in to the new season transfer market, Debub Police under newly appointed Head Coach Zelalem Shiferaw faces a huge task to stay at the upper tier.
The veteran midfielder who had had the best of his footballing carrier with Saint George as well as the national team has now became the most traveling senior footballer joining his fifth team in twenty plus years in a one year contract worth unofficial 400,000 Birr.
CECAFA Championship title and six Premier League titles with Saint George out of which four under his captaincy, Mulualem had been in the top league football for the past twenty three years yet still stands as one of the most versioned play maker who could deliver an inch perfect long passes.
Desperate to build a a squad that at least battles out survival in its first season at the upper tier, Head Coach Zelalem signed the veteran mid fielder over the week end. Though he is past forty years old with 23 years action packed experience with five different clubs many believe Mulualem could be an important helping hand to Zelalem if the squad members are willing to listen to him. Past forty he is not expected to run after balls but his expertise is on what to do with the ball in his possession.
In addition to his heyday with Saint George he has played significant roles in steering Sebeta Ketema and Ethiopia Medin promote to the Premier League as well contributed much in helping Hawassa Ketema stay at the upper league last season. 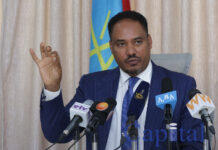 The African Union Assembly concludes with aim to achieve Agenda 2063