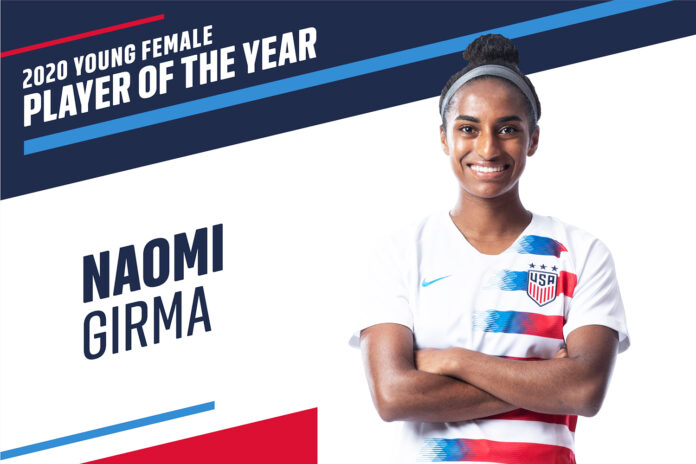 U.S. Under-20 Women’s National Team captain Naomi Girma who attended her first full U.S. Women’s National Team camp this year, has been voted the 2020 U.S. Soccer Young Female Player of the Year.
Naomi, who played a major part in helping Stanford win the NCAA Championship in 2019 as the Pac-12 Defensive Player of the Year, was the leader of the U.S. defense during the 2020 Concacaf U-20 Women’s Championship. As a team captain, Naomi started six games during the World Cup qualifying tournament to help the USA earn a berth to the since-cancelled 2020 FIFA U-20 Women’s World Cup and win the regional title, defeating Mexico, 4-1 in the championship game. She finished third on the team in minutes played while marshalling a back line that played an instrumental part in allowing just one goal. The USA went 545 shutout minutes in the tournament before allowing that score.
In her second and final U-20 cycle, Naomi was the third most experienced player on the team with 31 U-20 international caps. Naomi is only the second pure defender to win the award in its 23-year existence.
Her college season for Stanford – in what would have been her junior year – was postponed to the Spring due to the COVID-19 pandemic so she did not play in a college match this Fall, but in October, Naomi attended her first full U.S. Women’s National Team training camp, which took place in Colorado.
Fifteen U.S. Soccer Young Female Players of the Year have gone on to play in a senior level Women’s World Cup for the USA. The first winner, back in 1998, was current U.S. Soccer President Cindy Parlow Cone.

First place still up for grabs as EPL winds down