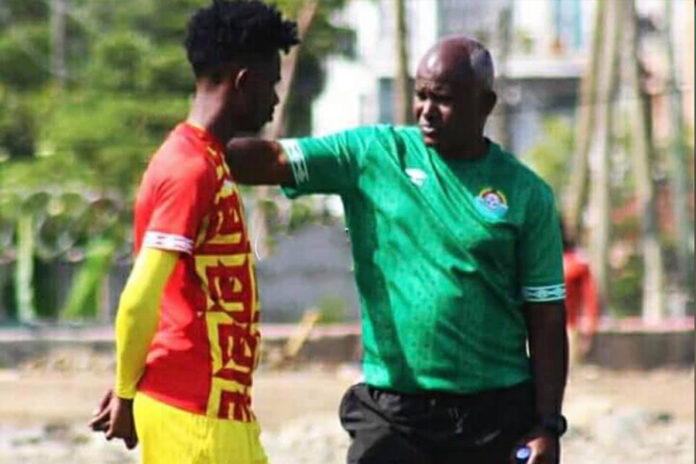 Ethiopian national team boss Webetu Abate has to field a U-23 team in Cecafa Senior challenge cup to be held in Bahirdar International stadium in three weeks’ time. Wubetu named a 35 strong provisional squad plus five senior players including Ethiopian Premier League top scorer and Best Player of the Year Abubaker Naser.
Following the decision reached in Cecafa meeting held on 11th March 2021 in Morocco, teams are expected to field the U23 players for this tournament. Chopping down eight and adding two from Super League sides Ethio-Electric and Medin, Wubetu kicked-off an intensive preparation at Youth Academy before travelling to Bahirdar in the coming days.
Though the collection brings together players from 14 teams, Sidama Bunna and Sebeta Ketema each contributed four players while runner-up Ethiopia Bunna, champions Fasil ketema, Wolayta Dicha and relegated Abajifar threw in three players each.
Goalkeeper Mentsenot Allo of Sebeta, Remedan Yusuf of Wolkite, Habtamu Tkeste of Fasil, Amanuel G/Michael of St George and Abubeker Naser are the five senior players added to the squad and expected to join the team next week.
Hosts Ethiopia will be joined by perennial participants Uganda, Kenya, Tanzania, Eritrea, Djibouti, Sudan, South Sudan, Rwanda, Burundi, Somalia, Zanzibar and the guests DRC as the countries that will duly take part in the championship.
This is the fifth time Ethiopia staged one of the oldest Cups in the world founded in 1926. Ethiopia won the title four times while defending champion Uganda is leading by far taking a record 15 championship titles while Kenya has been crowned ten times.