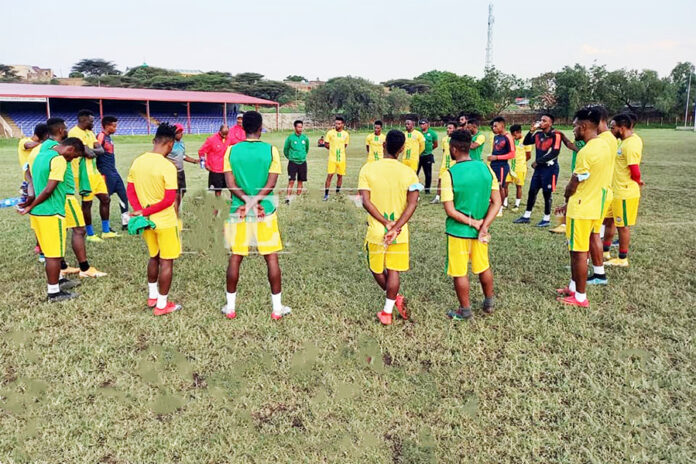 National boss Wubetu Abate has announced his Ethiopian 28 players’ squad as the build-up to the 2022 World Cup qualifier in Qatar begins.
The call-up is dominated by title defenders Fasil Ketema and record champions Kidus Giorgis having seven players each. Premier league runner-up Ethiopia Bunna dispensed four players while Baherdar Ketema and Wolkite handed three and two players respectively. Hawassa, AbaJifar, Sidama and Diredawa are represented by one player each.
Rising star striker Mujib Kasim, Top scorer and Player of the Year Abubaker Naser, midfielder Fetsum Alemu and winger Hayder Sherefa from Fasil and Ethiopia Bunna, Baherdar and Giorgis respectively declined the call due to personal problems. This means upcoming striker Amanuel G/Michael of Giorgis has a chance to play alongside much decorated goal poacher Getaneh Kebede in his debut African Cup qualification fixtures.
In the absence of the four players, Waliya boss handed a surprise call to Kidus Giorgis newly signed striker Chernet Gugsa meaning he is to join force with his elder brother defender Shemeket Gugsa of Fasil. Bezabeh Meleyo is the other player called back to the national squad.
Potted in group (G) along with Ghana, South Africa and Zimbabwe, Coach Webetu Abate faces a high hill to climb to break away from the group to have a place in Qatar World Cup final. Ethiopia will get its world Cup qualification campaign underway jetting-off to Accra followed by a home tie with Zimbabwe three days later.
Wubetu will be required to cut at least seven players when he names his final squad.

Privatizing Ethio-Telecom now should not be an urgent economic imperative