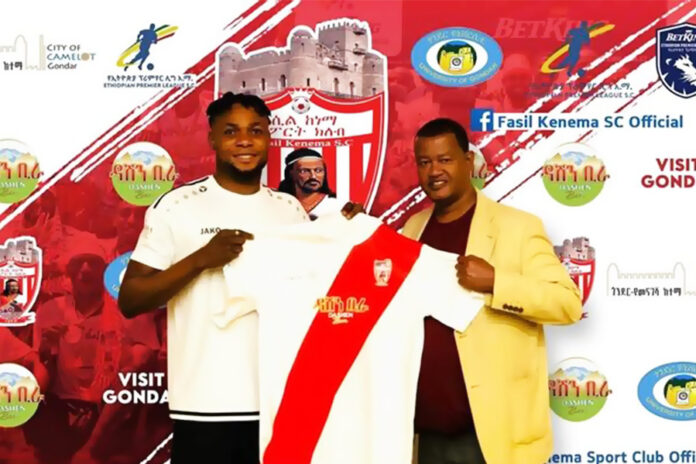 Champions Fasil Ketema managed a major coup snatching away the giant Nigerian goal machine Okikila Afolabi from his favorite boss Gebremedin Haile.
Okiki the main actor in helping Gebremedin win back to back premier league titles with Jimma AbaJifar and Mekele Ketema then a relegation saving successful battle at Sidama Bunna, the Nigerian Giant left Gebremedin in the cold joining Fasil in a one year contract.
Though the transfer amount is unofficial, EFF insiders tipped that Okiki pocketed a signing bonus of half a million Birr and 250 thousand Birr net monthly salary.
Back to back premier league titles with AbaJifar and Mekele Ketema finishing top scorer of the year with the latter netting 23 goals Okiki achieved an amazing record bagging 48 goals in 62 matches for AbaJifar, Mekele and relegation survivor Sidama Bunna where he scored nine goals in just seven appearances.
Pairing Afolabi with Mujib Kasim who finished runner-up in the top scorers of the Year contention, Fasil appears a side ready to write a new chapter in Ethiopian football history as the first ever Ethiopian club to reach CAF Cup knockout stages. A fearsome strike force in front and a formidable defensive side at the back (Ashalew Tamene and Yared Baye), “The Emperors” are the side to beat in the coming new season.