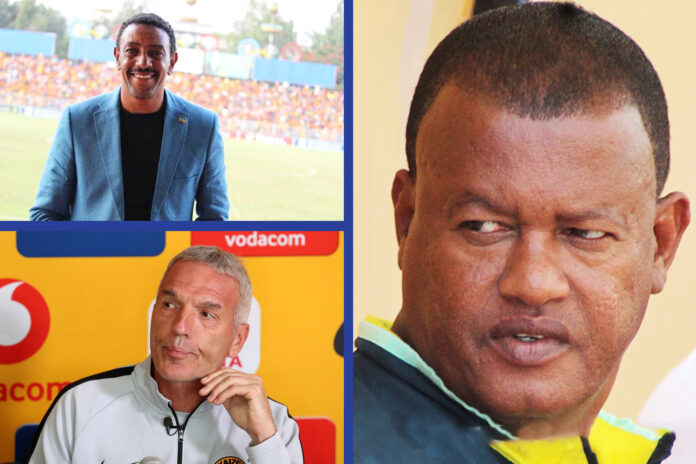 Just half way into the first round, three Coaches namely St George’s Maahier Davids, Fasil Ketema’s Seyoum Kebede and Sebeta’s Abraham Mebratu are currently under pressure from club supporters for poor results. Thus the speculation started flying around one of the three Coaches soon to be axed.
Two defeats and three wins and St George sitting 4th with nine points from five matches stop gap Coach Davids’ is the hot favorite to get axed sooner. Though the opening 1-0 defeat to Fasil past unnoticed, Tuesday’s 3-2 defeat to rival Ethiopia Bunna is considered the cardinal sin thus a huge roar from supporters for his neck to roll.
Three consecutive matches without a win, newly appointed Sebeta Ketema Coach Abraham Mebratu is also under pressure for his team dwelling down the table. Supporters went aflame at the two defeats; 4-2 to St George followed by 3-2 loss to Ethiopia Bunna, but the draw with bottom of the table Jimma AbaJifar appeared too much to tolerate for club supporters. Abraham’s Sebesta sits ninth in the table with five points from five matches.
Despite rubbing shoulders along with table tops, Seyoum Kebede of Fasil Ketema is under heavy pressures since that shaming defeat at the hands of nine men Ethiopia Bunna. Though it appears surprising for demanding the head of Seyoum one of the leading teams, supporters have big expectation of dominating the table top. Ten points from five matches Fasil sits third in the table with ten points.